Interactive web-enable visualizations for movement data visualizing commuting or migration flows are still rare. NCVA supports flow visualization research introducing spatial interactions for a wide variety of realized movements of people such as commuting and migration between an origin and a destination. This type of statistical flow data can visually be expressed by directed weighted arrows over a geographic space. Here, we demonstrate cartographic flow maps showing official (Sweden-Norway) border statistics related to a larger number of sub-national regions (e.g. counties and municipalities). Read more about Flow eXplorer at: Flowmap eXplorer

This applied research task was based on a collaboration with Region Västra Götaland Sweden and Ostfold Analyse Norway with the objectire to provide interactive visual tools to stakeholders helping them gain knowledge exploring possible opportunities for sustainable development in the regions along the long national borders between Sweden and Norway. The geographic area is mostly sparsely populated mountain and forest regions but in the south there are the most densely populated regions in both Sweden and in Norway which represent an important area with a tradition of cooperation and cross-border movement in both directions. The research objective aimed at evaluate, for the period 2006-2010, social systems and environments with a potential to identify growth in economic, social and environmental development but also to get a better understanding of how commuting across the national border could have a negative influence on local taxes for local regions. Norwegians pursue recreation and leisure activities in the attractive coastal and inland areas of the nearby Swedish border regions. On the other hand, the Swedes living in the border regions mostly commute to Norway to work.

Our web-enabled eXplorer tools were used to support visualization and time animation aimed at measuring economic, social and environmental developments engaging policy makers, statisticians but also the citizens. We introduced state-of-the-art spatial interactions for a wide variety of realized movements of people such as commuting and migration between an origin and destinations. This type of flow data is visually expressed by directed weighted arrows over a geographic space. 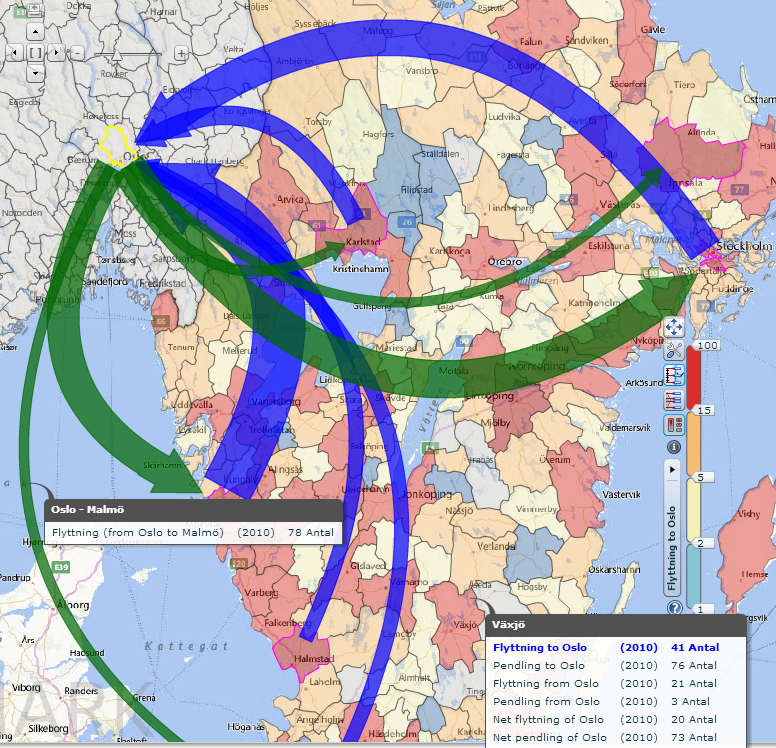 Figure: Norwegian - Swedish municipality Flowmap eXplorer Demonstrator based on the origin placed in Oslo and showing the top five flow migration data between Oslo and Swedish municipalities. This regional eXplorer flowmap demonstrator was evaluated by our case study partners (Region Västra Götaland, and the Norwegian county Ostfold Fylke) for communicating the essentials of official migration and commuting statistics to a broad range of users via the Västra Götalandsregionen Web site specially established for Swedish-Norwegian statistical data related to migration and commuting data, for example, this interactive regional population forcast visualization. 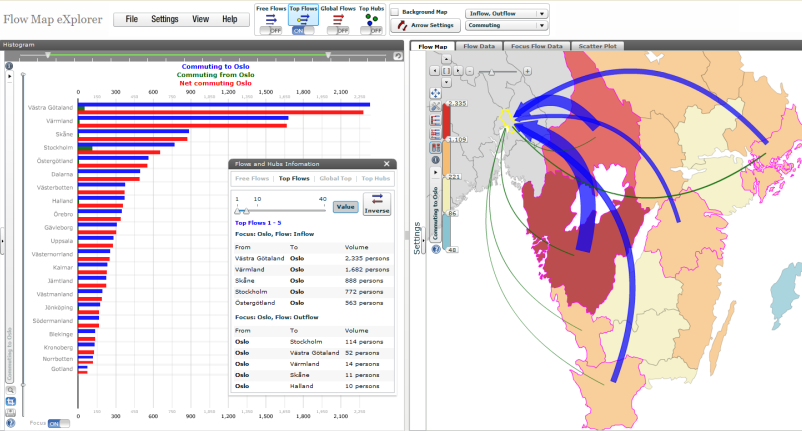 A high level of user interaction controls answering various questions about flow data such as: 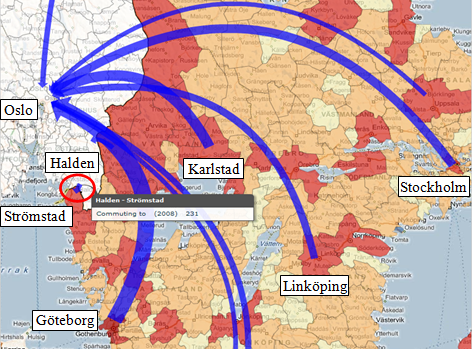 The flow map demonstrator was used by our case study partners (Statistics Sweden, Region Västra Götaland, Norwegian county Ostfold Fylke) for communicating the essentials of official migration and commuting statistics to a broad range of users via their web site. The tool has been used by statistics experts to analyze in depth the geographic structures and correlations resulting in good stories which have been presented on this web site. This has proven to be an excellent way of catching the attention of many users, including the media.

Statisticians from both Swedish and Norwegian authorities summarized in their evaluation reports that gained insight and knowledge based on this interactive flow map case study identifies more efficiently commuting statistics across the border and the potential political and economic consequences compared to experience from previous used more static flow map applications. The gained knowledge from the interactive flow animations during 2002-2010 and attached time glyphs clearly indicates an increasing trend that significant more Swedes prefer to communicate and work in Norway then the reverse scenario. An important conclusion that was of particular importance related to negative tax affect for Swedish municipalities along the border. The combination of multiple linked “heat maps” with overlaid weighted arrows and a dynamic bar chart results in a comprehensive insight into number of people commuting from a large number of Swedish counties was another positive comment. Consensus was that the introduced methods and demonstrator could help advance usage of interactive flow map visualization for a better understanding of both commuting and migration between sub-national regions and across national borders.