OECD has since long felt the need to make regional data much more easily available on the web in an interactive and user-participative way. In particular, to make a more extensive use of dynamic web-enabled visualization which can, more effectively than a static graph, convey the four dimensions included in the regional database: statistical indicator, time, regional and country value. In addition, timely information on the progress of a local community requires crossing different sources of information and new ways to generate and share information for decision-making. The OECD Regional eXplorer was introduced at the public OECD Web site in September 2008 and immediately gained a lot of interest and became a popular statistical Web site.

Figure: OECD eXplorer with its Storytelling Panel presenting "elderly dependency rate" during 1990-2013 for European TL2 regions in a Map correlated with the Distribution Plot. We discover that Italy, France and Portugal have regions with the highest elderly dependency rates highlighted in both views. The map shows the geograpical location while we in the distribution plot easily discover the countries and regions with eldest population (ItalianLiquria). The Storytelling panel includes additional knowledge and understanding about the selected statistical indicators.

OECD countries have experienced a growing interest in regional development. The performance of regional economies and the effectiveness of regional policy help determine a nation’s growth and shape the measure of well-being across countries. This interest has generated new demand for sound statistical information at the sub-national level on factors that are important to regional competitiveness. The OECD Regional database is a unique source of statistical information at sub-national level for all the OECD countries. It contains yearly time-series for around 40 indicators of demography, economic accounts, labour market, social and innovation themes in the OECD member countries and other economies. Within each country regions are classified on the basis of two territorial levels: the higher level TL2 consists of about 400 large regions in the OECD countries, while the lower level TL3 comprises about 2000 small regions. 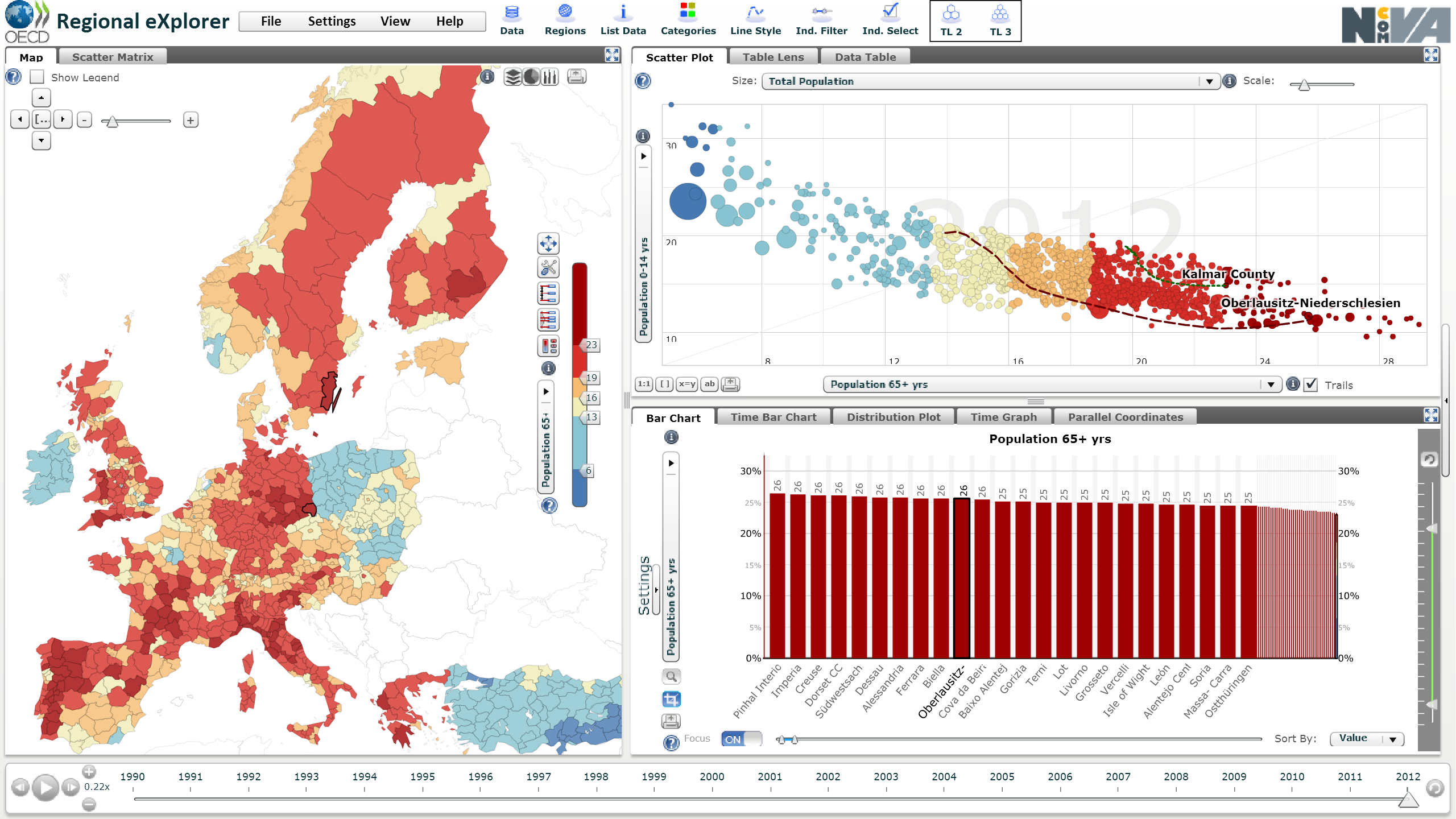 Figure: Spatial-temporal and multivariate statistical data are here simultaneously explored through the use of dynamically linked multiple views to detect complex patterns and problems. The views are coordinated using the GAV data linking method based on the data cube model and colouring scheme. Any filtering or highlighting made in one of the linked functional components is transmitted to all the others. This is an example of an OECD Regional eXplorer linked views scenario (choropleth map, scatter plot and fish eye bar chart) applied to about 1200 OECD EU TL3 regions. The chosen colour map indicator is “percentage of population aged 65 and more”. Selected regions are highlighted in all three views for comparison.

Many analysts and citizens want to create content and express themselves through “user-created knowledge” and a more pro-active, collaborative role in content creation, distribution and shared use. Active users and user-centred innovation are increasingly important and could have a beneficial social impact. Target groups for this knowledge-generating, collaborative Geovisual Analytics eXplorer tool are quite diverse. A primary target group is policy-makers in charge of regional development policy, who can make use of this tool in their decision process. As well as statisticians and analysts involved in policy analysis and evaluations. Citizens and the media can also get informed and at the same time participate in increasing the knowledge on how life is lived – and can be improved – from region to region. Because of the different expertise and needs of the target-groups, the tool must be flexible and adaptable to different audiences.

In collaboration with OECD, NCVA introduced the usefulness and strength of the Parallel Coordinates Plot (PCP) applied to large statistical regional data. The PCP represents a common information visualization technique to the academic community and was now, for the first time, made available to the statistical  world through the public OECD web site.  The PCP enables visual representation of spatial multivariate data and hence a key explorative mechanism in an interactive statistical visualization application. The technique supports a large number of tasks for analyses of relationships between indicators. In the case of OECD eXplorer, each region is represented by a string passing through the parallel axes. Each axis represents a single indicator. A string forms a visual representation of the characteristics of one region. Differences between selected regions can be found by visually comparing the profiles representing them. Dynamic range sliders are attached to each axis and the user can dynamically select or combine filter methods thus altering constraints on indicator values shown in the other views. See figure below:

The figure below shows statistical filter methods based both on ranges chosen by the user and on percentile calculations are embedded in the PCP attached to an indicator. An important advantage with the PCP exploration technique is the capability to dynamically make visual inquiries and filter data. Filtering data is a critical step in the process of data analysis of a large number of OECD regions. Filter out uninteresting regions; reduce the data set to a smaller, more manageable size.

Figure: The figure (top) shows only regions which fulfil two conditions controlled by dynamic sliders along the indicators axes: a) Labour productivity must be higher than the OECD mean value (green line) and b) unemployment rate must be lower than the mean value. Two regions Oslo and Liguria which comply with these conditions are highlighted. Figure (bottom) shows the regions with the highest (above 90th percentile) and the lowest (below 10th percentile) labour productivity. Oslo’s profile is highlighted. 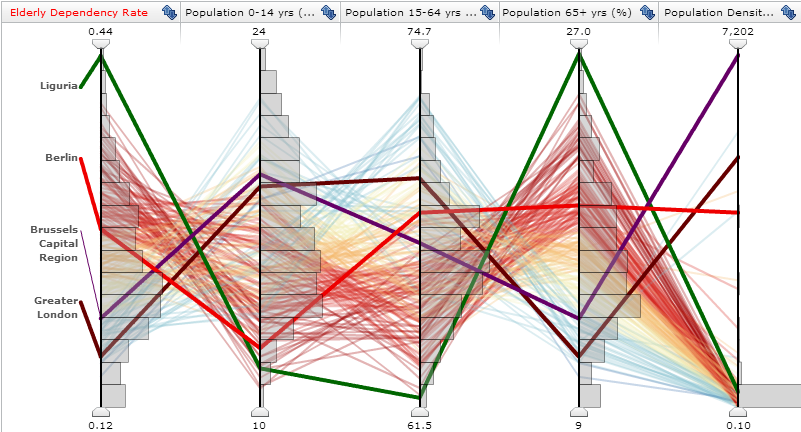 Figure: A string forms a visual representation of the characteristics of one region. Differences between selected regions can be found by visually comparing the profiles representing them. We see that Greater London has the highest value for "age group15-64" and lowest for "age group 65+". This special visualization method is today a proven and efficient methods to compare regions for several indicators.

This OECD Distribution Plot is an innovative variation of the box plot visualization method and was developed 2009 in collaboration between NCVA and OECD. This visualization method excels at showing how OECD regions are represented within a country for a selected indicator. Each cluster is represented as one row of dots (regions that belongs to the country) and these dots are a representation of each data item belonging to this cluster. The method is based on the premise that a data item must belong to a cluster. It is a good way to visualize the differences within a cluster; showing the minimum, maximum and mean value as well as the interval of the values in the cluster. Use the menu on the left side to change which indicator to be visualized and use the green scroll bar on the top to "zoom" in on interesting areas. 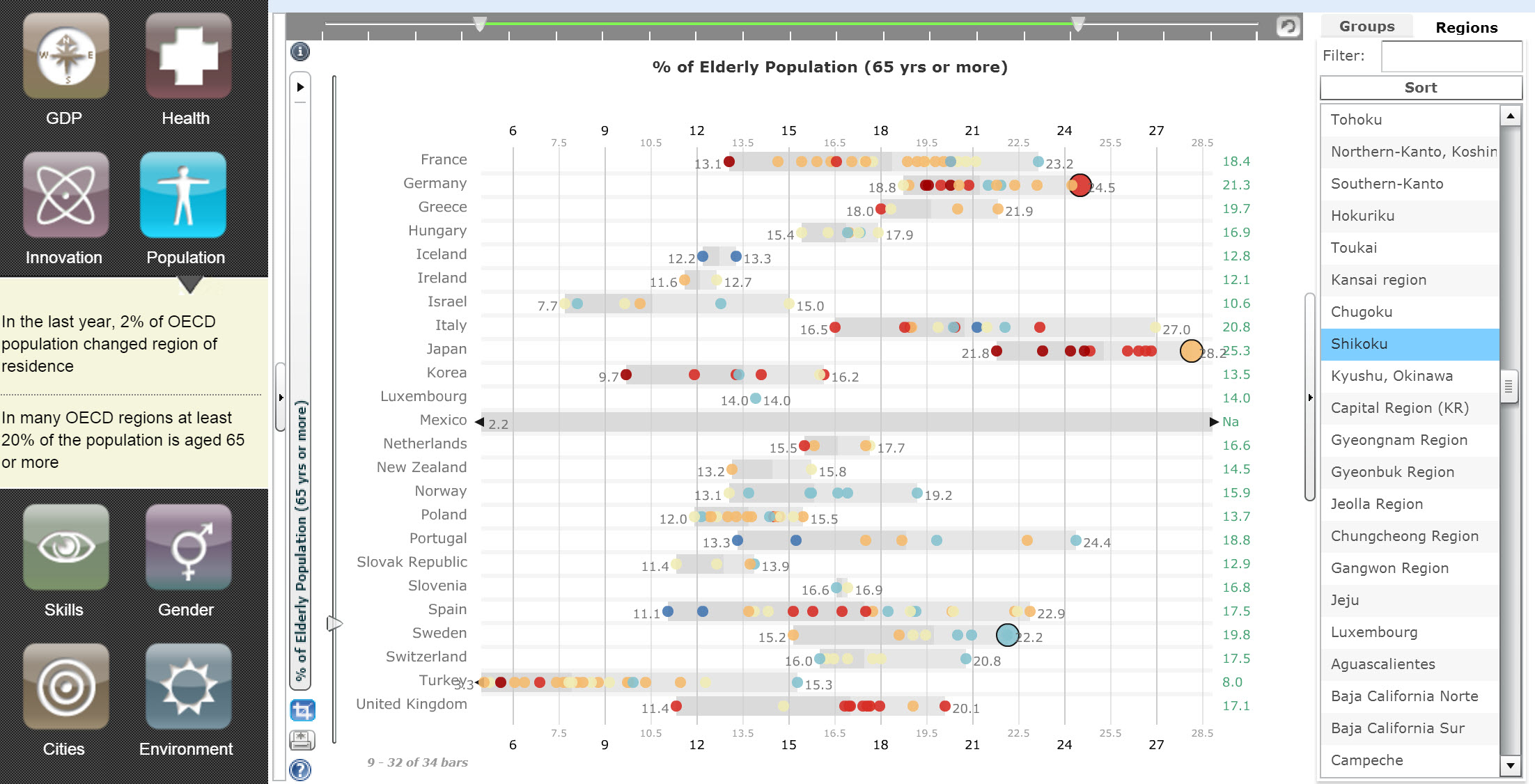 The Dustribution was developed by NCVA in close collaboration with OECD and has become a popular statistical visualization method.

The OECD Scatter Plot analysis the correlation of two indicators in the OECD Regional data set. A OECD TL3 region is represented by a dot at the intersection values for the two indicators chosen on the X-axis and Y-axis. The plot also shows two extra dimensions through the use of colour, which is shared between all views, and through the size of each dot, so the number of indicators simultaneously analysed is increased to four. To change which indicators to be displayed, use the three combo boxes, one for each axis and one at the top for dot size. The maximum dot size can also be adjusted through a bar on the right hand side. Hovering (tooltips) above a dot (region) will display detailed information, and clicking on the dot will select (highlight) the region in all views along with the Scatter Plot. You can select (highlight) several regions by clicking with the mouse on the region and pressing the CTRL button on the key board at the same time. Alternative, click on one or several regions in the map and the corresponding regions will be highlighted in the Scatter Plot.A zoom function is initiated by holding down left mouse button and at the same time draw a rectangle. Regions inside this rectangle will be zoomed in and axis scaling and annotations are changed accordingly (right image). Zoom can also be initiated by using the middle mouse scroll. This alternative zoom function also depends on the position of the mouse. 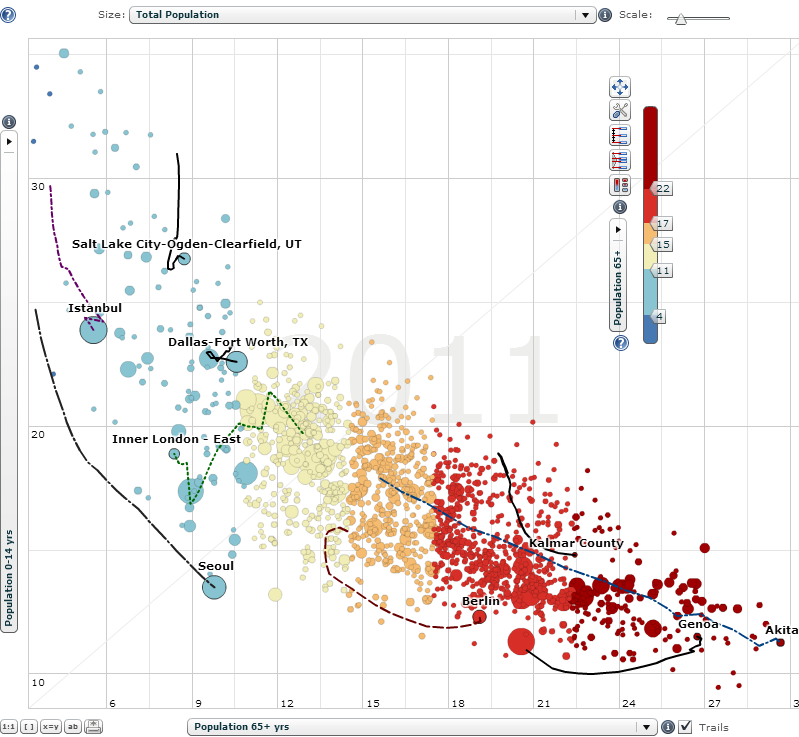 Figure: About 2000 OECD NUTS3 world regions are analysed for 1990-2012 in this NCVA scatter plot for 2011 we compare vertical axis "age group 0-14" with horisontal axis "age group 65+". A number of interesting regions are selected and we see the development over time through the traces. Growing elderly population can be discovered for Berlin and Italian Genoa. Seoul has a dramatic reduction of younger population.