Statistics eXplorer available at these locations:

You are invited to use our NEW Geovis Portal for publishing your own Vislets. Read more about this at:

Use this guest login:  email and password for login

World eXplorer below is loaded with a selection of the latest statistics from the World Databank. The world map below shows ageing population through three coordinated and linked views: 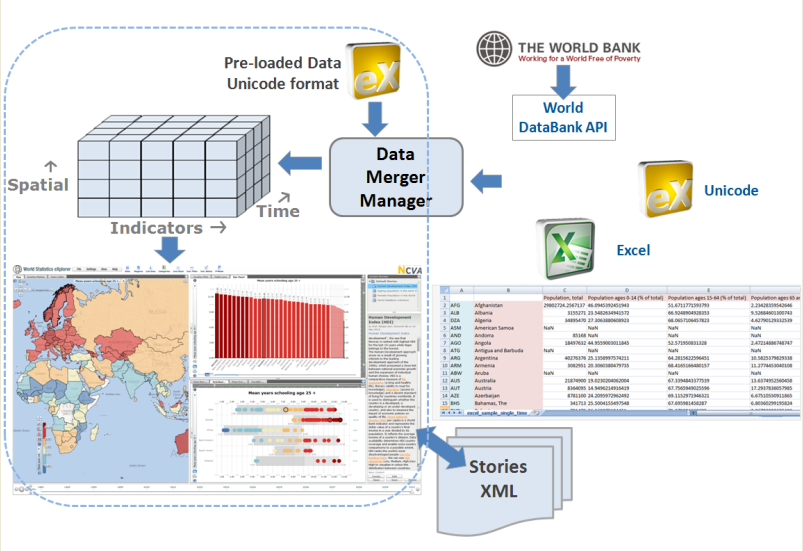 Figure: Multivariate spatio temporal statistical data can be imported using various types of Excel formats or direct from the to the World Databank through an API interface. This statistical data interface will always give you direct access to the latest data from the World databank 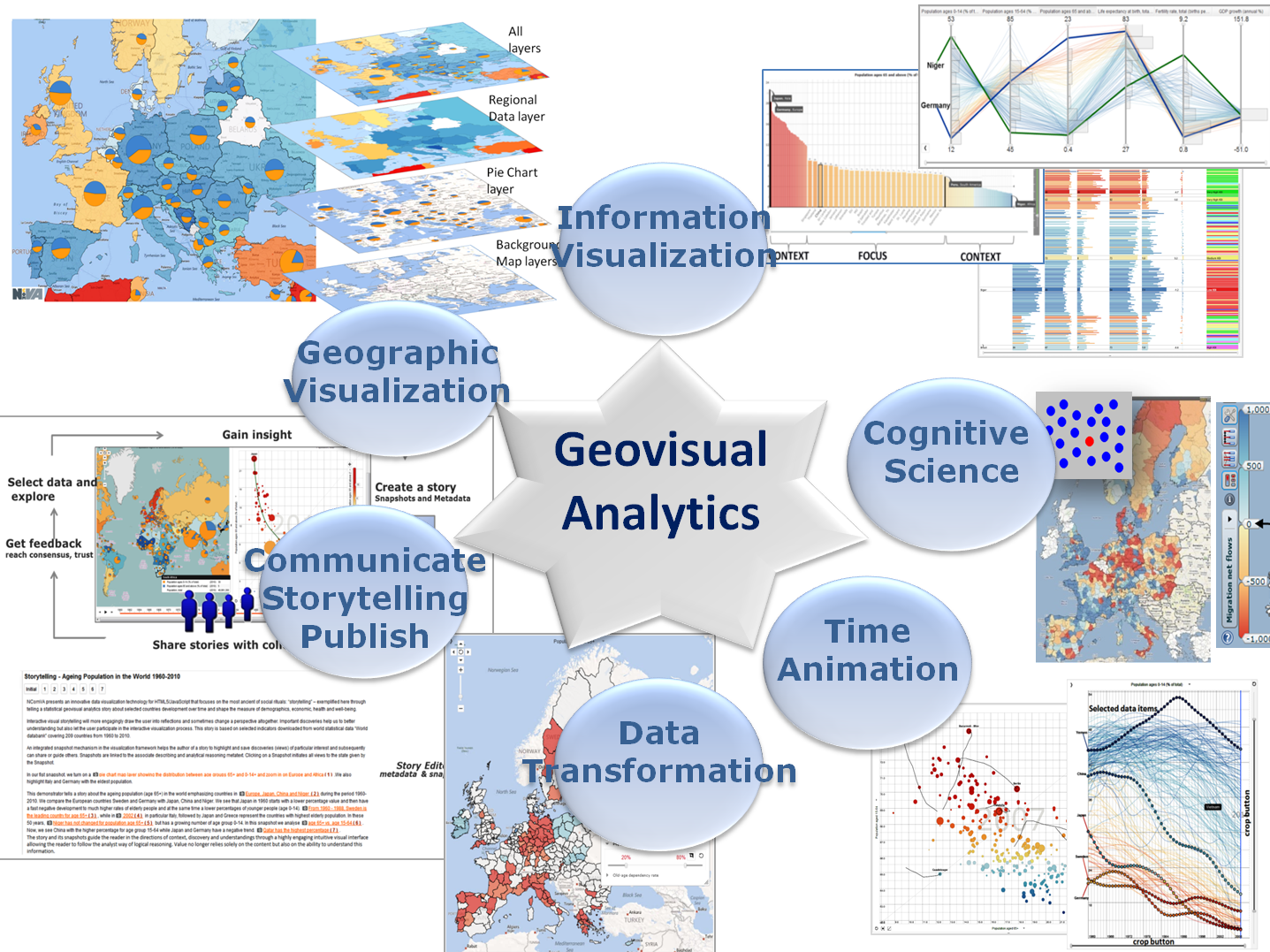 Statistics eXplorer is a web compliant application suite that enables the statistics visualization of socio-economic information at national or detailed territorial level providing clear insight on regional differences and performance within a country and comparison of different areas across countries. Statistics eXplorer enables users to explore simultaneously spatial, temporal and multivariate data (both numeric and categorical) from multiple perspectives, to discover interesting relationships, to share their incremental discoveries with colleagues and finally to communicate selected relevant knowledge to other users. A Statistics eXplorer application is composed of GeoAnalytics Visualization (GAV) components facilitating a broad collection of dynamic visualization methods developed and integrated for use with the Adobe Flash and Flex development platform. In this respect, Statistics eXplorer represents a leading edge tool being adapted to the Internet and used as a web-enabled toolkit by many international (OECD, IMF, Eorostat,..) and national organizations.

Learn more about eXplorer through these 2 videos:

The first public versions of Statistics eXplorer were released in November 2008 installed at SCB http://www.scb.se/statistikatlasen/ and OECD web-site named named OECD Regional eXplorer - see: http://www.oecd.org/gov/regional-policy/regionalstatisticsandindicators.htm . Several extended versions has been released (last in 2016) that enhances the possibility to explore trends over time, provides novel functions for presenting stories about the statistics and combines metadata and maps status.

Further developments have resulted in the creation of the following eXplorer versions: World eXplorer,  Sverige eXplorer, Europe eXplorer and MDim eXplorer available on this web site. 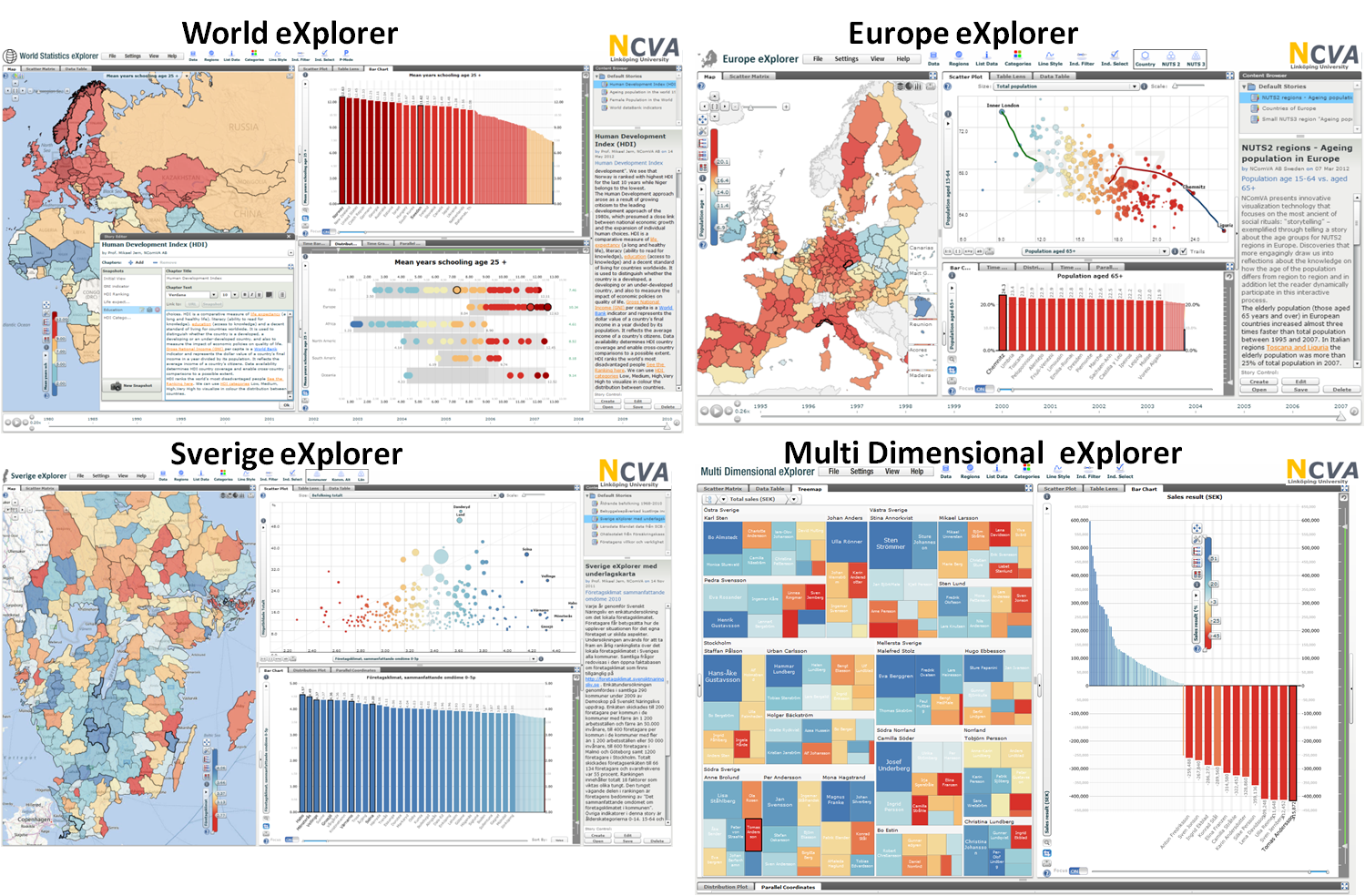 Interactive controls enable the user to enter a visual dialog with the data using a well-known information visualization seeking rule: “analyze first, show the important, zoom, filter and analyze further, details-on-demand”. Visualization methods also provide the foundation for using multiple linked and coordinated views and in the Statistical eXplorer framework applied together with combinations of brushes realizing the overall concept of our framework. The eXplorer applications demonstrates this concept to simultaneously present, explore, and analyze different aspects of multivariate data. The views are used adjacent to each other and include map, scatter plot, bar chart with fish eye view, time graph, parallel coordinates, distribution plot, data table etc. Interesting subsets of the data are interactively selected and brushed, and the relations are investigated in all the linked views. A data-of-interest method is used in all linked views to visually separate interesting data features from the rest of the data.  To accomplish this the eXplorer framework uses focus&context defined within information visualization such as the fish eye technique in bar graphs and dynamic queries in parallel coordinates, table lens and an attached color legend extending the analysis capabilities to scenarios with larger data sets.

Figure: The eXplorer analytical storytelling loop – A Story with snapshots and metadata is created in the eXplorer Story Editor – Story is saved and can be shared with colleagues to reach consensus – The Story can be accessed by the public. 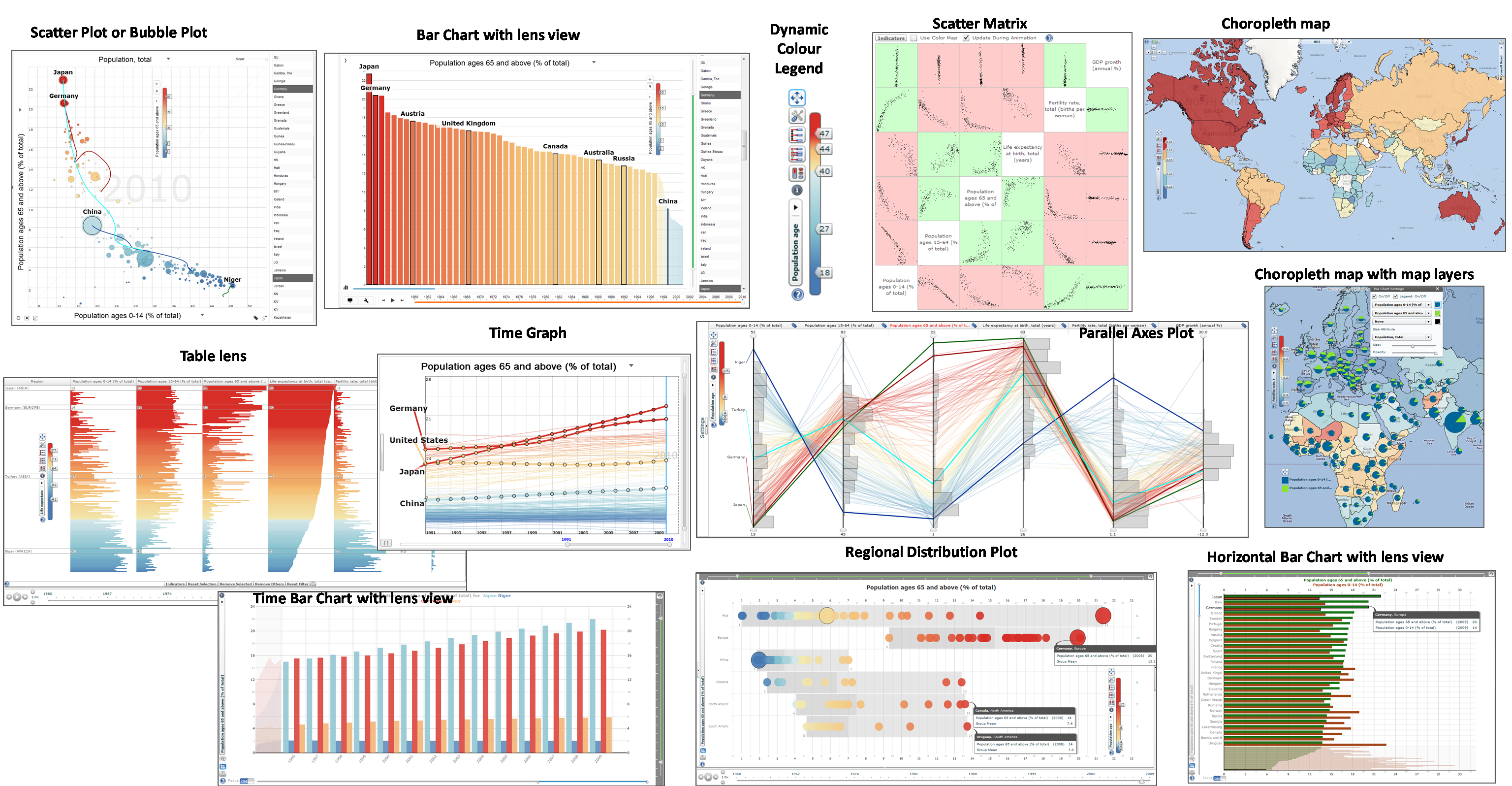 This municipality map of Sweden shows "highly educated people" based on statistics from the SCB Statistical Database. 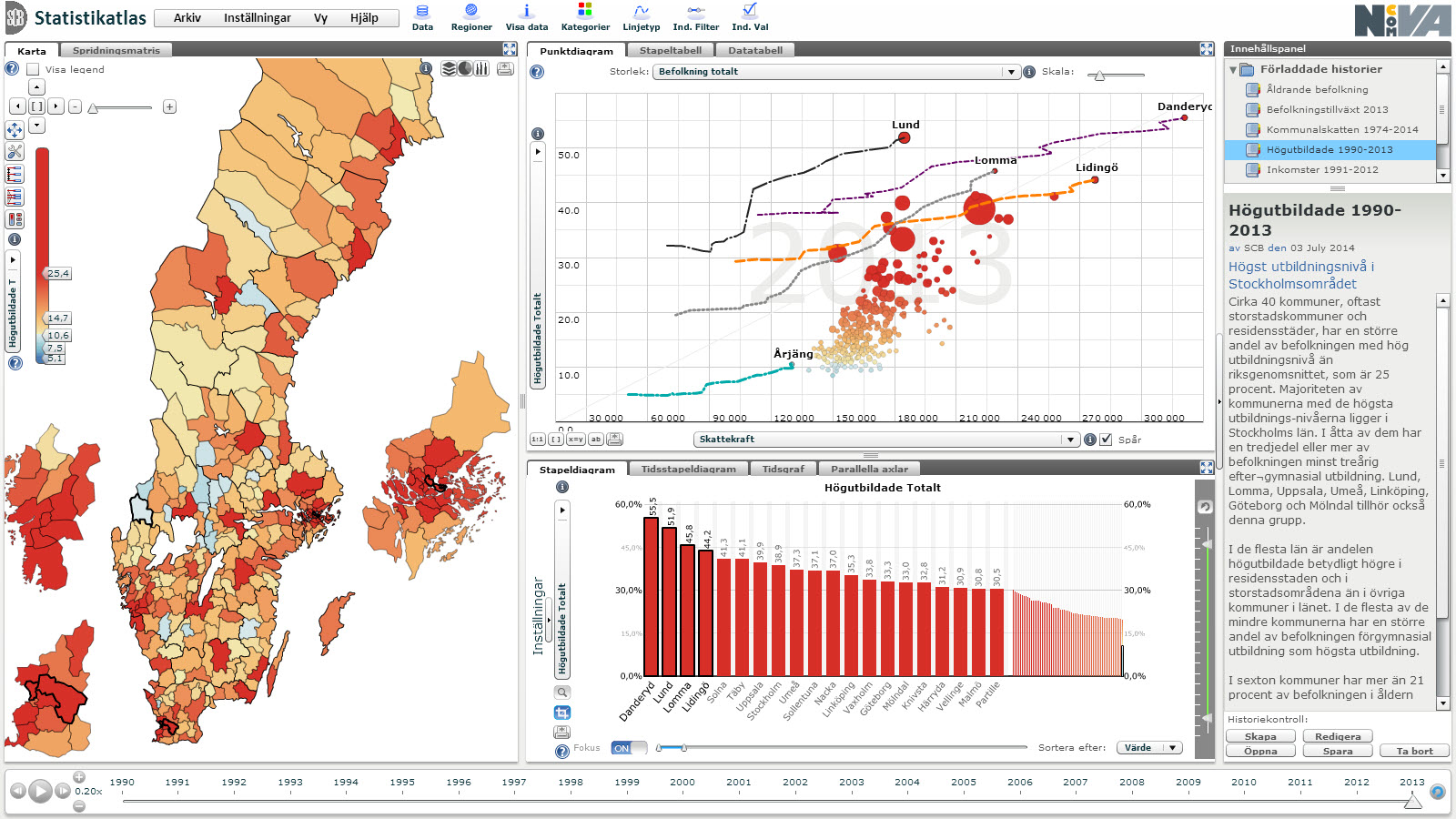 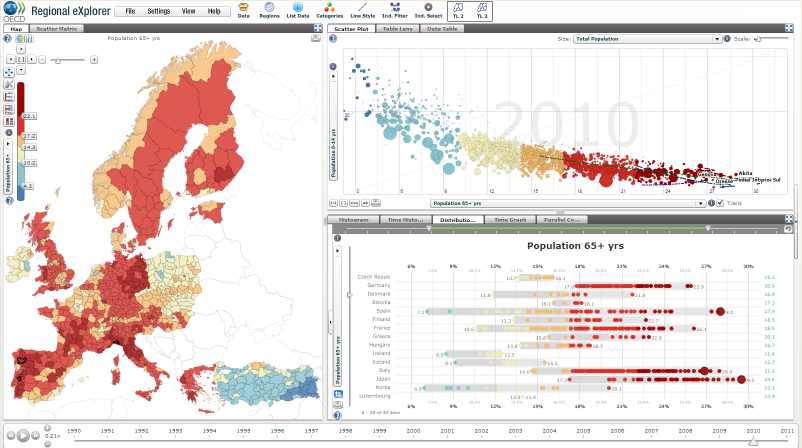 Figure: OECD TL3 (simular to Eurostat NUTS3) showing ageing population (65 and above). The Distribution plot shows that Germany and Spain has regions with highest rate of elderly people.

OECD countries have experienced a growing interest in regional development in recent years. The performance of regional economies and the effectiveness of regional policy help determine a nation’s growth and shape the measure of well-being across countries. For the past years the OECD has been studying regional disparities and development patterns in its member countries in order to evaluate innovative strategies and diffuse successful policies.

The OECD Regional database is a unique source of statistical information at sub-national level for all the OECD Countries. It contains yearly time-series for around 40 indicators on demography, economy and labour market opportunities, environment, social issues and innovation related activities for more than 1,700 regions of the OECD countries. Regions within each OECD country are classified on the basis of two territorial levels: the higher level (TL2) consists of 335 large regions while the lower level (TL3) is composed of 1,679 small regions. This classification, adopted in many countries in the design of regional policy, facilitates greater comparability of regions at the same territorial level. The OECD regional database is available on the Statistical Portal at the OECD website http://stats.oecd.org/OECDregionalstatistics/#story=1 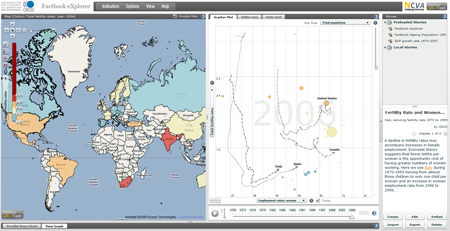 The image shows fertility rates vs. employment for women 1970-2006.

This is another collaborative Geovisual Analytics project between Statistics Sweden and NCVA providing visualization methods for BIG data here represented by more than 10,000 geographical zip code regions and associate indicators. 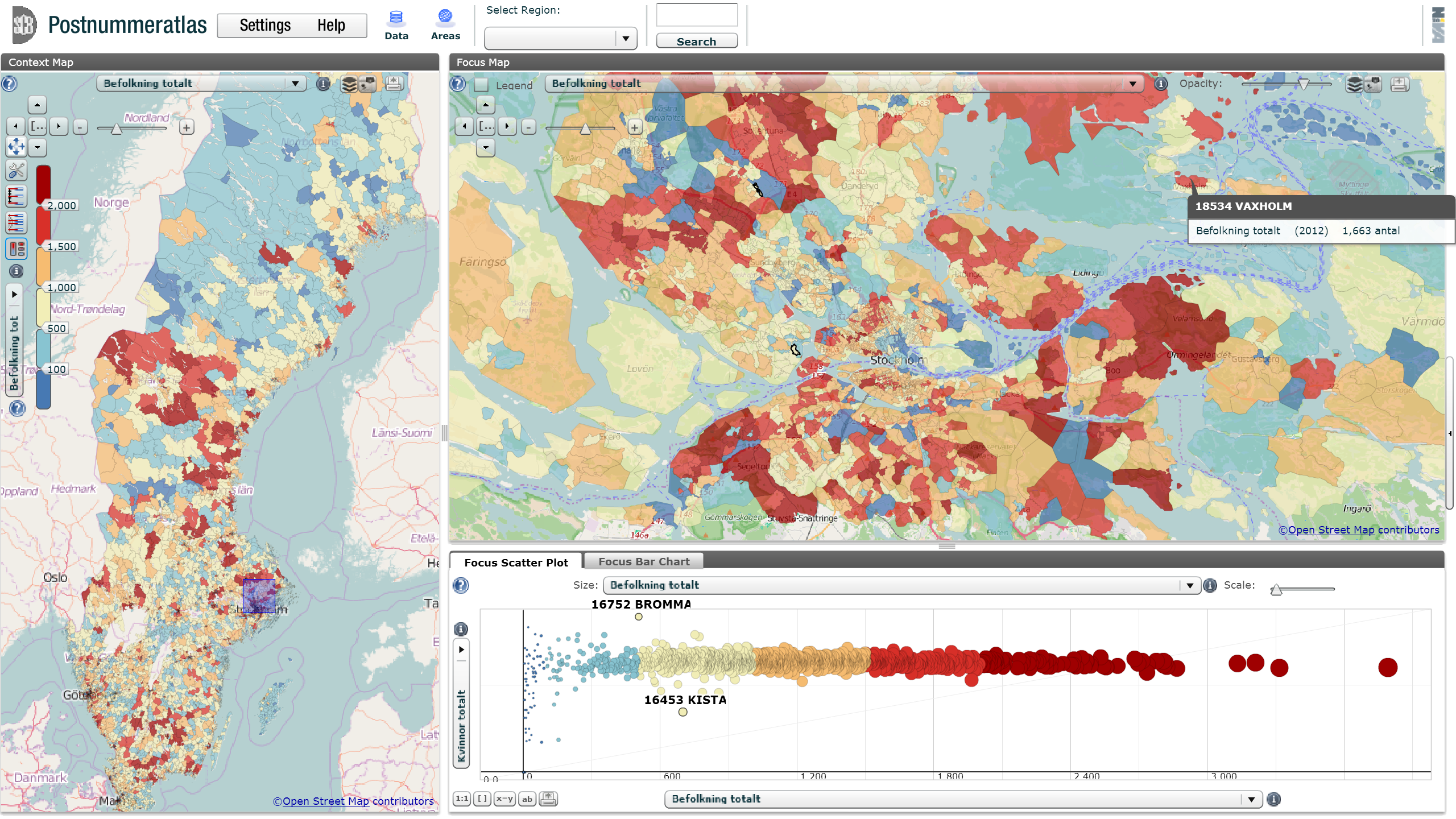