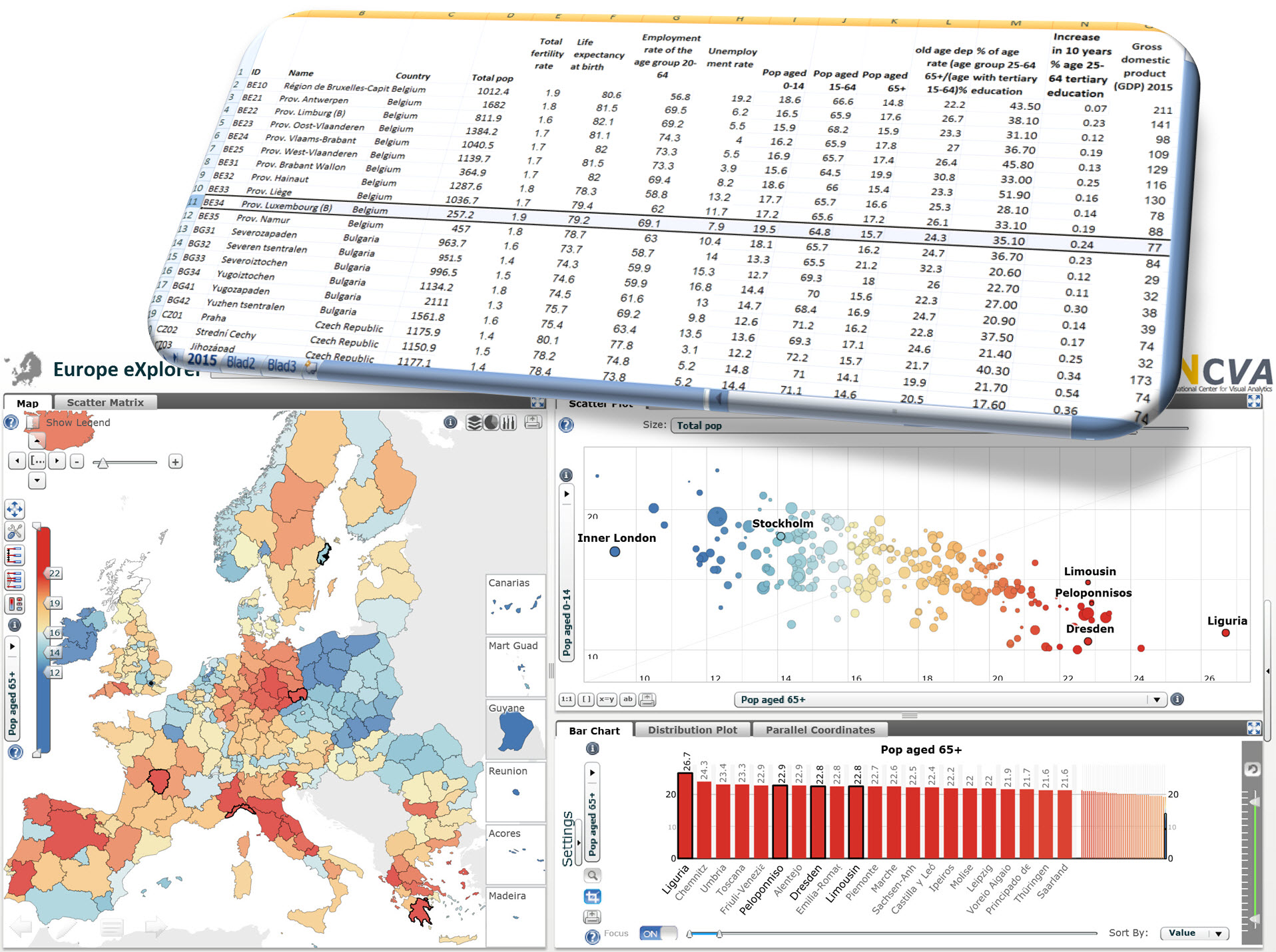 Abstract sound information at sub-national level and benchmarking of regions across national borders has increased in importance in the policy agenda of many European countries due to higher integration driven by institutional processes and economic globalisation. Geovisual analytics techniques help illustrating complex regional, spatio-temporal and multidimensional statistics.

“Europe eXplorer”, was developed by NCVA in collaboration with OECD and Eurostat for visualizing and better understanding the socio-economic structure of European NUTS2 or NUTS3 regions.The EU Member States are often compared with each other, but in reality it is very difficult to compare a small Member State like Malta, which has around 420 000 inhabitants, or Luxembourg, which has around 540 000 inhabitants, with Germany, the most populous EU Member State at close to 81 million inhabitants. Comparing regional data that are as detailed as possible is often more meaningful and this also highlights the disparities — or similarities — within EU Member States themselves.

The European Union places considerable emphasis on cohesion policy, with the objective of bringing Europe's regions and cities closer together in economic, social and environmental spheres.

EC countries experience a growing interest in regional development. The performance of regional economies and the effectiveness of regional policy help determine a nation’s growth and shape the measure of well-being across countries. For the past years Eurostat has been studying regional disparities and regional economic growth in its member countries in order to evaluate innovative strategies for development and spread successful policies. This interest has generated new demand for sound statistical information at the sub-national level on factors that are important to enhance economic growth and living conditions.

and can be loaded with othar indicators from the Eurostat database based on NUTS2 or NUTS3 using Excel. 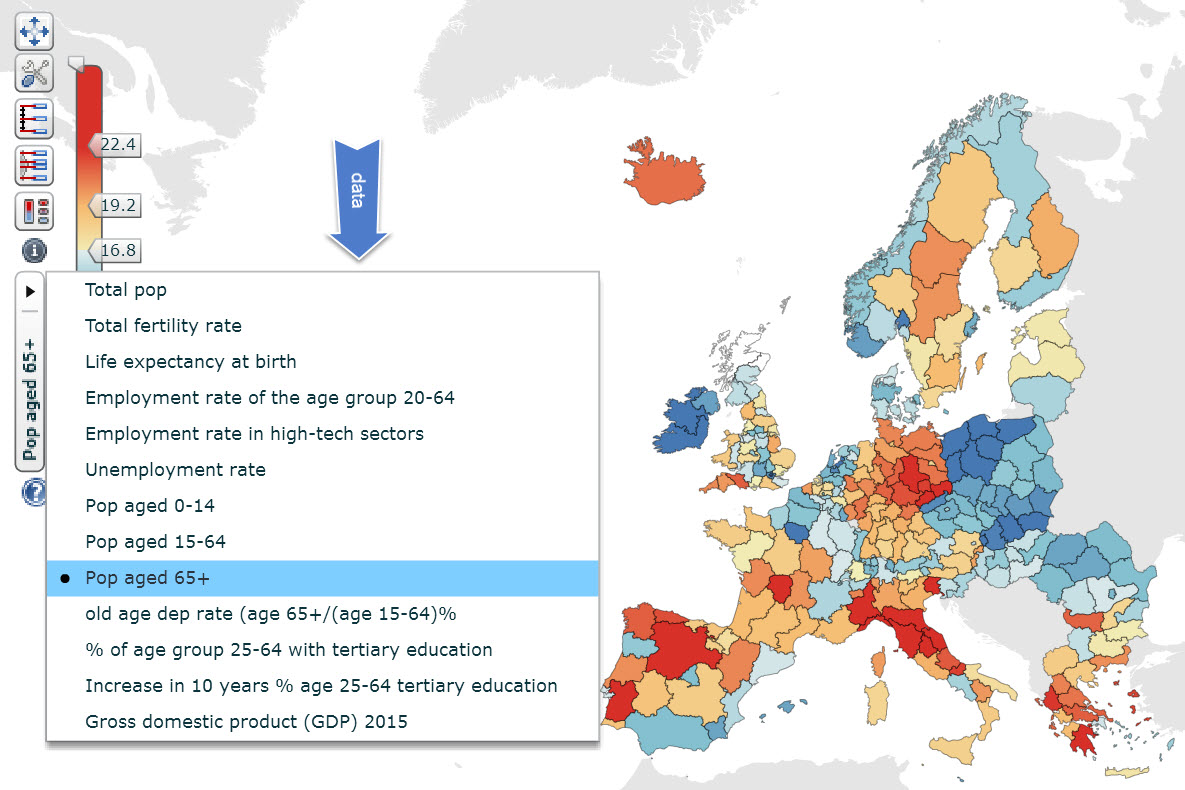 Inner London has the highest value for both GDP/BNP and education - Strong correlation. Romania has the lowest educational and GDP/BNP values in Europe. High resolution picture: Europe eXplorer Karta NUTS2 Techn vs BNP II.png . See also corresponding EXCEL data below. This map shows indicator "population aged 65+" and a list of all available indicators (total pop, fertility rate, life expectancy etc.) when you click on the colour scale "indicator select". The Vislet (interactive picture) below allows you to further explore the selected European statistical data. Or start Europe eXplorer with the link below to see more and analyse this data set:

Figure: Example of a standard EXCEL file with NUTS2 statistical indicators applied in the figure above and also represents the preloaded data set in Europe eXplorer. Each region is identified by its code, for example, BE34 Prov. Luxembourg and country Belgium. You can use this EXCEL file to insert your own data. Just make sure that the first two columns match data. This EXCEL file can be dowloaded:  http://ncva.itn.liu.se/resources/data/1.678695/EUNUTS2IndicatorsEXCELData2015.xlsx

This Distribution Plot in Europe eXplorer, shows each NUTS2 region along a horisontal axis "age group 65+" for each country. The region "Liguria" in Italey has the eldest "65+" population. Red bubbles represents NUTS2 regions with an eldery population 65+ and blue population with younger population. Download the Story File to your computer to be imported into Europe eXplorer: http://ncva.itn.liu.se/resources/stories/1.704089/Europe-explorerNUTS2-with-distribution-plot.xml 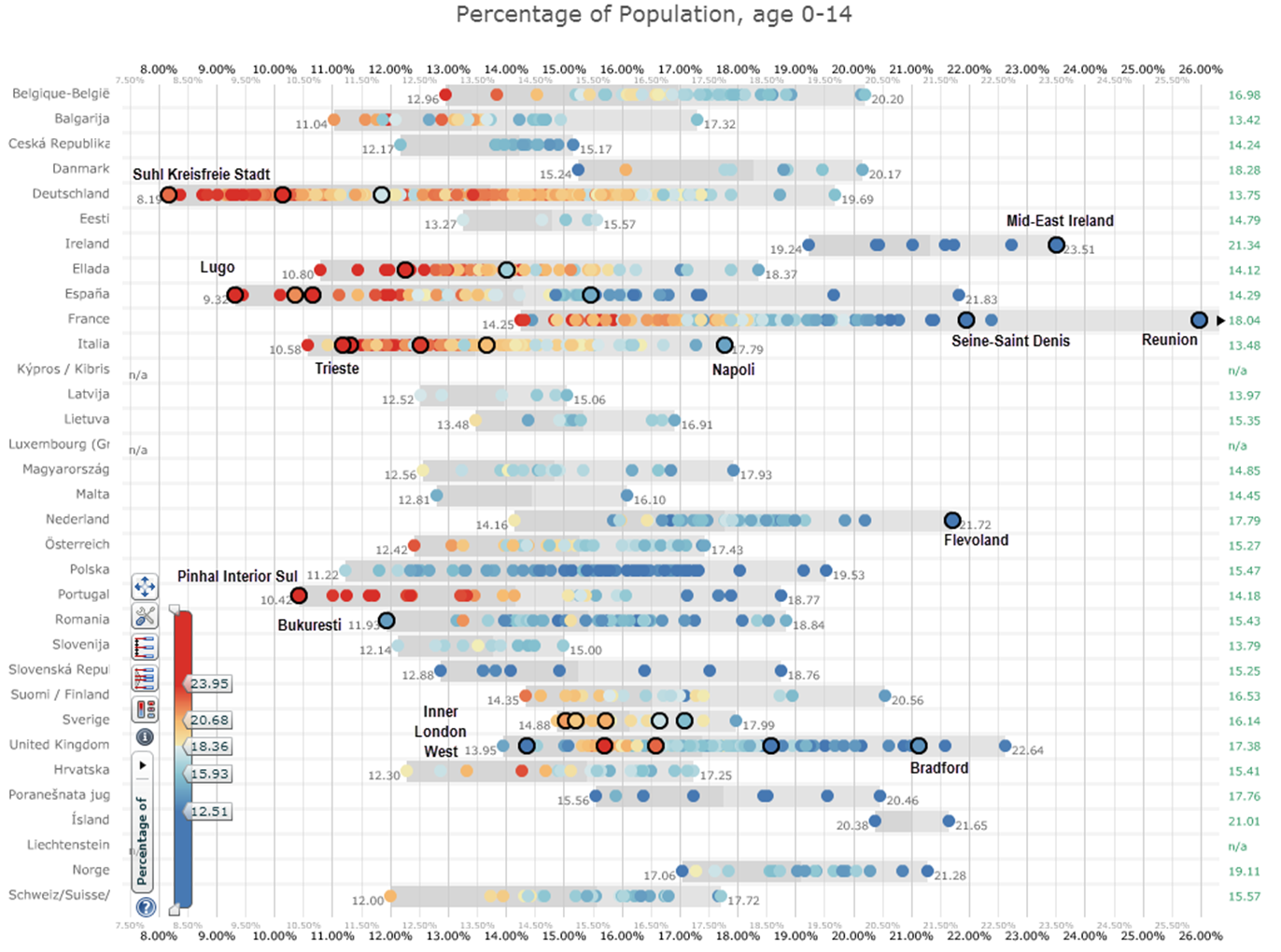 Figure: This Distribution Plot in Europe eXplorer, shows each NUTS3 region along a horisontal axis "age group 0-14" for each country. The region "Reunion" in France has the youngest "0-14" population. Red bubbles represents NUTS3 regions with an eldery population 65+. We see that Germany, Portugal, Greece, Italy and Spain are among the European countries with regions having a large percentage of elderly population. But they also have regions with a much younger population.

Figure: Example of a standard EXCEL file with NUTS3 statistical indicators applied in the map and distribution plot above in Europe eXplorer. Each region is identified by its code, for example, BE231 Prov. Arr. Aalst and country Belgium. You can use an EXCEL file to insert your own data -  make sure that the first two columns match data. This sample EXCEL file can be used as a format and be downloaded from:

Storytelling, in Europe eXplorer, is about telling a story on selected European countries or regions (NUTS2, NUTS3) and the related analytics reasoning processes on how statistical knowledge was obtained. Our storytelling implementation is based around three complementary characteristics: explore and gain insight, tell-a-story and publish a "Vislet" :

A Story with snapshots and metadata is created in the eXplorer Story Editor (see figure below) – A story is saved and can be shared with colleagues to reach consensus. "Storytelling" is achieved through a mechanism in eXplorer that supports the storage of interactive events through “memorized interactive visualization views” or “snapshots” that can be captured at any time during an explorative analytics process and becomes an important task of a web-based storytelling authoring analytical reasoning process. In the figure below we see a "snapshot" Chemnitz - coordinated and linked between the Map, Snapshot list and integrated into the Storytext.

Read more about Storytelling at: http://ncva.itn.liu.se/explorer/storytelling?l=en

The interactive Vislet below embedded into this web site was produced from a Europe eXplorer Story, saved on a local, imported into our Publisher (views are setup), HTML5 code is created and embedded into your own web site. Zoom in on the map with (-) or (+) or use scroll with mouse - click on your region and see the coordination with the two other views.

Eurostat NUTS2 and NUTS3 visualization with our Tools

Our collaboration with OECD started in summer 2008 - The first version of OECD eXplorer was published om the OECD web site and created a lot of attention. This public OECD eXplorer web site has more than 50,000 visitors per month.  http://www.oecd.org/gov/regional-policy/regionalstatisticsandindicators.htm

OECD use our Statistics eXplorer named OECD eXplorer and Metro eXplorer to compare demographic trends, economic, social and environmental performance of regions and metropolitan areas in OECD countries and to view interactive maps and other visual presentations of the regional database and the metropolitan database 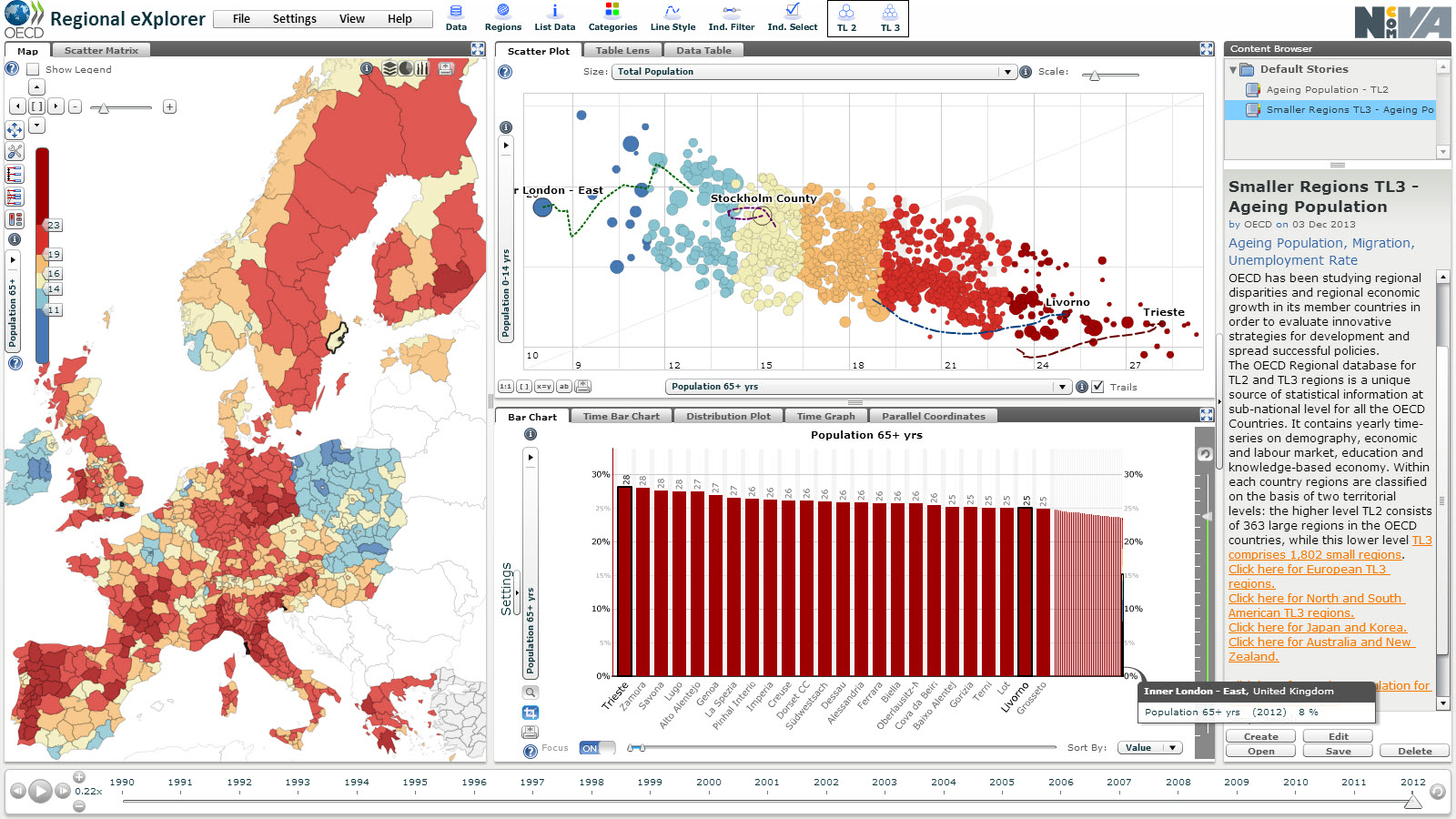