The Scatter Plot (sometimes called a bubble chart) is a graph that displays how two indicators in the data set relate (correlate) to each other. A country is here represented by a dot at the intersection values for the two indicators chosen on the X-axis and Y-axis. Each dot has an X- and Y- coordinate (value) that matches the axes.  In the scatter plot, each dot represents a country and its position is controlled by a Y-coordinate (Fertility rate) and X-coordinate (Age dependency - amount of elderly people in the country).  The plot can also show two extra dimensions through the use of colour (population growth), which is shared between all views, and through the size (total population) of each dot sized by area. This means that the number of indicators simultaneously analysed can be increased to four. However, we still have one more attribute "Time". In the figure below, movement over time for a country is represented by its trail line. 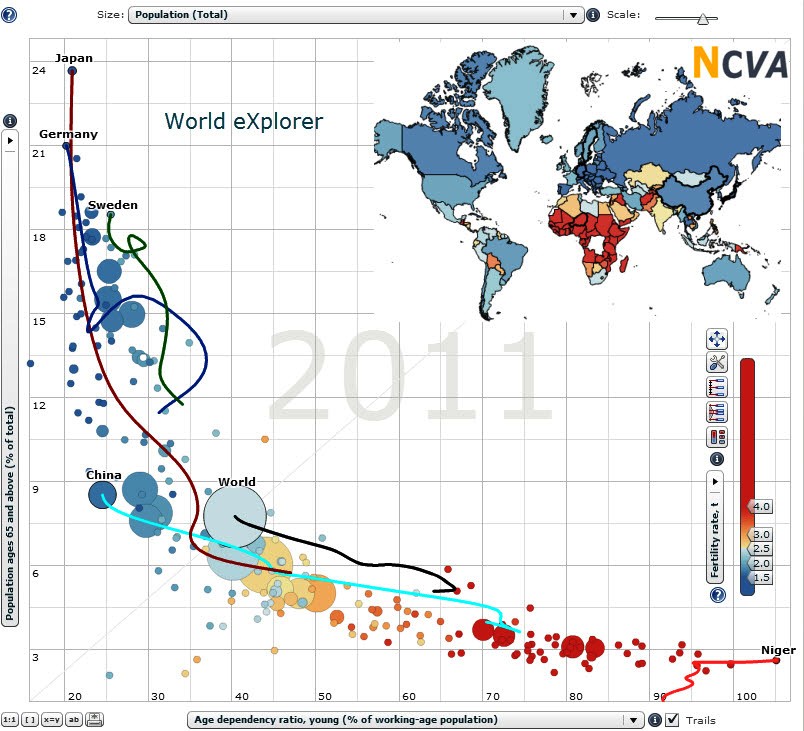 Figure: Scatter Plot in eXplorer is here connected direct to the worlddata bank http://databank.worldbank.org/. We have selected 5 (five) variables using 5 dimensions: X, Y, Colour, Size and Time 1) Population ages 65 and above (% of total) Y-axis, 2) Age dependency ratio, young (% of working-age population) X-axis, 3) Fertility rate  (Colour) 4) Total Population (dot size by area) and 5) (trail line) representing time 1960-2012. We see that Japan has had a dramatic increase of elderly population since 1960. We see also that China has had a dramatic reduction of younger population. The World here represented by a bubble shows a slowly growing elderly population and reduction of younger population. The inserted world map shows the colour attribute "fertility rate" where red colour indicates a high fertility rate. Niger has a different path with an increase of young population and high fertility rate.

Initiate World eXplorer and interact with the above variables in a scatter plot http://mitweb.itn.liu.se/GAV/world/ To change which indicators to be displayed, use the three combo boxes, one for each axis and one at the top for dot size. The maximum dot size can also be adjusted through a bar on the right hand side. Hovering (tooltips) above a dot (country) will display detailed information, and clicking on the dot will select (highlight) the region in all views along with the Scatter Plot. You can select (highlight) several dots (regions) by clicking with the mouse on the dot and pressing the CTRL button on the key board at the same time. Alternative, click on one or several regions in the map and the corresponding dots will be highlighted in the Scatter Plot.

Figure: A zoom function in Scatter Plot is initiated by holding down left mouse button and at the same time draw a rectangle (figure). Regions inside this rectangle will be zoomed in and axis scaling and annotations are changed accordingly. Zoom can also be initiated by using the middle mouse scroll. This alternative zoom function also depends on the position of the mouse. 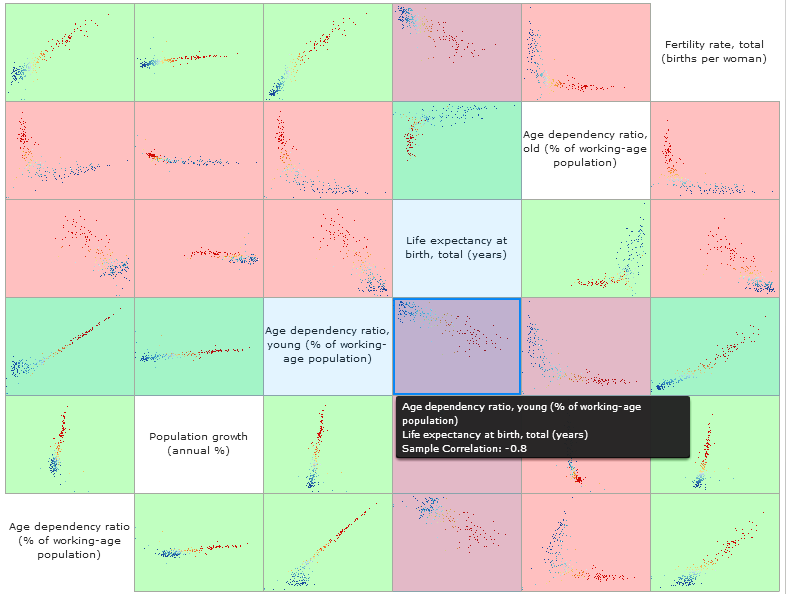 Figure: Six statistical indicators selected from the worlddata bank are correlated against each other in small scatter plots. The user gets a quick overview of any interesting correlation to be explored in more details.

Figure: A Scatter Matrix and Scatter Plot are here linked and coordinated in World eXplorer with downloaded statistical data from the world dataBank. 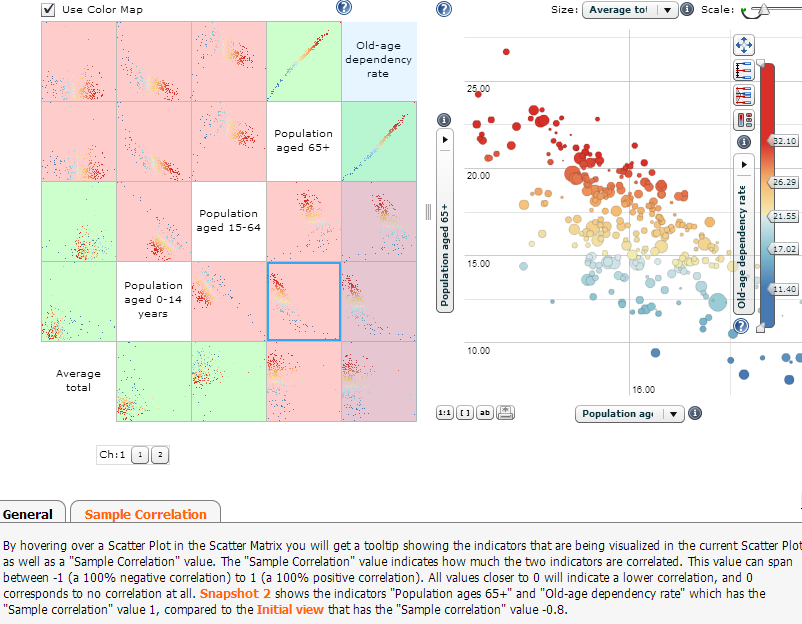