Geovisual Analytics for Mobile Communication Networks together with Ericsson Research

Cellular radio networks such as mobile networks are continually growing in both node count and complexity. It therefore becomes more difficult to manually configure the networks and necessary to use time and cost effective algorithms to automatically configure the networks. There have been a number of attempts to develop such automated algorithms. For instance, Ericsson, a Swedish telecommunication company, has developed an algorithm, called Automatic Neighbour Relations (ANR), which automatically creates and updates neighbour cell relations as well as assigns and updates physical cell identities to avoid local conflicts. A network operated under an automated algorithm is called a self-organizing network. Network operators, however, may not trust automated algorithms because they need to have an understanding of their behaviour, reliability and efficiency, which is not easily perceived. The challenge, therefore, is to develop tools to support network operators to understand the way automated algorithms work. To support better understanding of the approaches used in this part of the research, the next paragraph will briefly describe self-organizing network data.

Self-organizing network data mainly includes three datasets: a cell dataset, a relation dataset, and a network event dataset. The cell dataset contains cell properties and cell counts such as cell global identity (CGI), physical cell identity (PCI), cell location, cell direction, number of call drops. The relation dataset contains property values and counts of cell relations such as source cell, target cell, number of handover successes, number of handover failures. The network event dataset is a collection of network events which describe how the network is configured or evolved under the operation of an automated algorithm. Network events include relations added, relations removed, relations in the black list, PCI-conflicts, PCI-conflicts detected, PCI updates (i.e. cells changing one PCI to other PCI). In these events, PCI-conflict detected events and PCI update events are the most important ones, since they show how well an algorithm detects conflicts in the network and reconfigures the network. 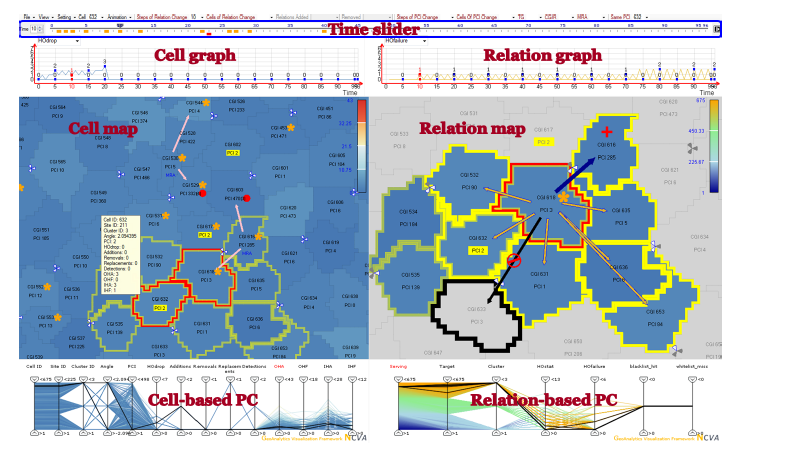 The applications should be scalable from small networks up to networks with thousands of nodes. To the operator, the application should be perceived as one integrated solution, although the network may comprise a multitude of radio-access-technologies (multi-RAT), like GSM, WCDMA and LTE, standardized by 3GPP.

Particularly, it is important to provide operators with applications that ensure trust in automatic SON features in the mobile communication network, which are means to cope with the high complexity of today’s networks.

The solution is based on novel integration between Geovisual Analytics, Information Visualization, GIS and Data Mining. By utilizing advanced techniques in these areas the requirements can be solved. To deploy we have developed a Geovisual Analytics Visualization (GAV) Flash framework that facilitates development of a web-based, dynamically, multiple-linked views demonstrator called ANROSS(Automatic Neighbor Relations Operation Support Systems). A grid or regional map provides a context view of 9000 sites and 27000 cells and display the health of the network and support identifying network areas of problem quickly:

o   It allows operators to see how the network evolves over time from different initial configurations;

o   It allows answering various questions about how ANR configures the network;

o   It supplies tools such as filtering, searching tool to find and supervise problem cells and relations;

o   It can also predict cells and relations having potential problems in future;

ANROSS is being developed in close collaboration with domain experts from the Swedish telecom company Ericsson Research Linkoping to show how ANR works. ANR is an algorithm invented by Ericsson to automatically detect and resolve physical cell identity (PCI) conflicts; therefore it can self-configure cellular radio networks that are typically mobile phone networks. To show how ANR work it is important to visualize and analyze the network data which are output of the process in which ANR configures a network.

The network in this context mainly includes two kinds of objects: cells and cell relations. A cell is a device that covers a geographical area and serves mobile phones in its area as well as handovers phone calls to other cells when necessary. Each cell has two identifiers: a globally unique cell identifier (CGI) and a PCI. CGIs are unique and constant over time but are more difficult and time consuming to detect for mobile terminals. In contrast, PCIs are easier to detect but they are not unique since there are at most 504 different PCIs in LTE. The PCI of a cell can vary over time since it needs to be unique in a region and may need to change. A cell relation is a neighbor relation between two neighbor cells. Cell relations are used to handover phone calls from one cell (source cell) to a neighbor cell (target cell).

The project focuses on the following geovisual analytics research challenges:

- Volumes of data, orders of magnitude larger and different levels of abstraction 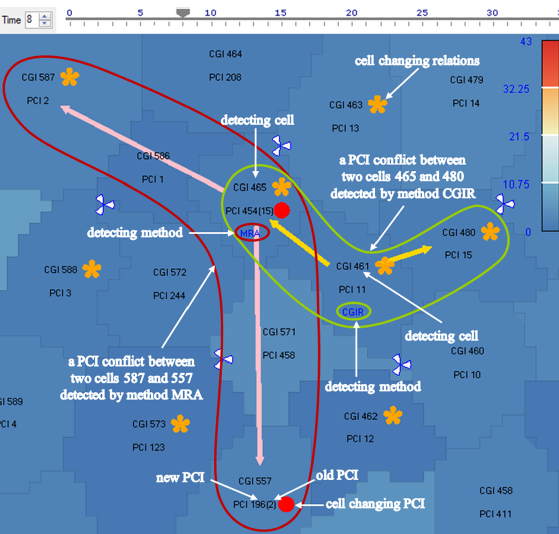 The system is developed based on the user-centred approach. To support network operators to easily and quickly identify what happen in the network, where they happen and why they happen, a map is suitable for this purpose. However, since the self-organizing network data contains two datasets: a cell dataset and a relation dataset, it is logical to have two maps, one for the cell dataset and the other for the relation dataset. This approach also helps to reduce the clutter which may happen if we use only one map for both datasets. Similarly, each map is divided into a number of layers, each layer representing for one property (or attribute), or one type of count, or one type of event. For property values or counts, coloured-polygon and glyph layers are used. For events which involve only one cell (e.g. PCI-conflicts and PCI-updates), it is good to use glyph layers to represent them. However, for events which involve more than one cell (e.g. PCI-conflicts detected), it needs a special method to represent. A PCI-conflict detected event normally involves three cells: two cells which have a PCI conflict and a third cell which detects this conflict.

Figure 2: An illustration of network events occuring in a time interval

This type of event also contains the information of the method that is used to detect the conflict, for example, the method of CGI report (CGIR) or the method of mutual relation addition(MRA). For each event of this type, it is good to use two arrows and one glyph to represent it. Two arrows represent the relationship among three cells and the glyph represents the method used to detect the conflict. To distinguish different methods used for detecting conflicts, arrows are coloured differently based on the method used. Figure 2 illustrates a number of cell map layers in which PCI-conflict detected events associated with the method of MRA are represented by pink arrows and PCI-conflict detected events associated with the method of CGIR are represented by yellow arrows. 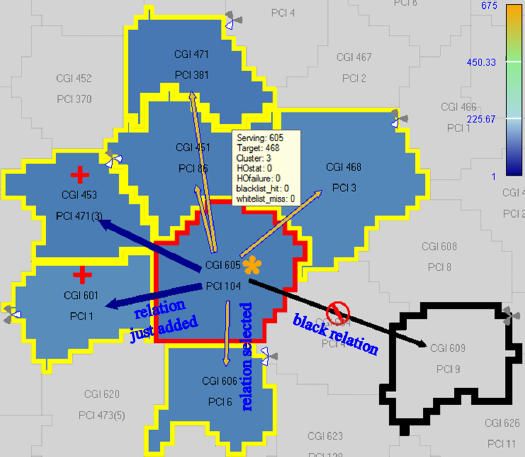 To reduce the overlapping among layers of the cell map, a polygon representing a cell is partitioned into areas, as illustrated in figure 3; each area is reserved for a layer. Since a cell, in some cases, can be selected as a source cell and a target cell at the same time, to represent this cell, the polygon for the cell includes two borders with two different colours, one for the role of a source cell and the other for the role of a target cell, as illustrated. To visualize relations, arrows are selected because of their simplicity. To distinguish different relation types such as relations added, relations removed or relations in a black list, arrows are enhanced with colours and glyphs.

Figure 3: An illustration of using arrows with borders together glyphs and colours to represent various types of relations

In addition to the two maps, a number of other interactive visualizations are selected to facilitate the exploration and analysis of data. For example, two parallel coordinate plots, one for cell data and the other for relation data, are used to support filtering data, finding extreme cells and relations, finding correlation among cell counts or relation counts, and so on. Similarly, two time graphs are used to allow the network operator to supervise the performance of selected cells and relations over time. A special time slider enhanced with glyphs is designed to allow network operators to control the selection of time period, time animation and especially to highlight time periods of change (i.e. intervals in which cells change their PCIs or their relations) of selected cells or the whole network. This can help network operators to easily follow and analyse the changes in the network. Tooltips are also used to provide detailed information of objects which the user hovers on. 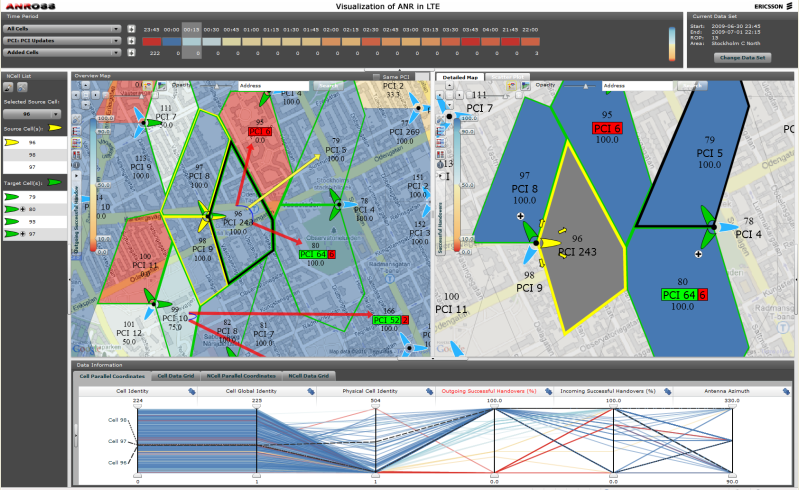 Through the interactive views ANROSS allows users to see how the network evolves from different initial configurations under the control of ANR and answer various questions such as:

- Why a cell changes its PCI, how a PCI conflict is detected, and what is the difference in performance of a cell (e.g. number of call drops) before and after a PCI change;

- Why a relation is added or removed, what is the performance (e.g. number of handover failures) of a relation;

In addition, through using filtering ability of PCPs and searching tools ANROSS allows users to find and supervise “problem” cells and relations such as cells/relations having a large number of call drops/handover failures, or cells having a potential PCI conflict in future.

ANROSS has been evaluated by network experts from Ericsson and has also been shown to Telia, one of biggest network operators in Sweden. The overall feedback from both the network experts and the operator is very positive. They like the time slider, the two maps and the ability to see how the network changes over time. The ability to find ‘problem’ cells and relations were also considered as highly positive “-it looks useful and very good to me”. As a result, they would like to collaborate to develop this prototype into product.

Visualization of Self-Organizing Networks Operated by the ANR Algorithm RIVF09.pdf

This research product was funded by VINNOVA, Ericsson Research and NCVA