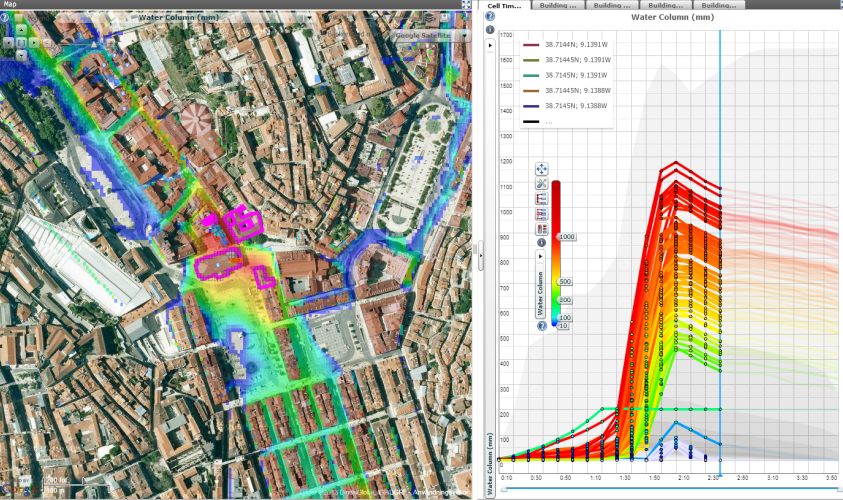 Figure: Flooding based on data from Lisbon 2010 - http://mitweb.itn.liu.se/GAV/flood.mp4

Flood data is simulated based on a real flood event taking place on 29 October 2010 in Lisbon. It is simulated for a period of 4 hours with the time resolution of 10 minutes on an area of 3.2km x 3.6km in Lisbon downtown. The data is provided in a format of a grid of cells in which each cell has the size of 4.5 m x 4.5 m. Each cell has a series of values which represent the water-columns at that cell over time. Other inputs include a map of buildings and formulas provided by experts from SIM for estimating the damage caused by the flood event to buildings. The formulas are developed from the point of view of an insurance company. The damage to each building is calculated based on (1) the water- column surrounding the building, and (2) the types of the building.

The system is developed based on the GAV framework. A multiple coordinated linked views approach is used to allow the user to view data from different perspectives. A map view is selected as the central view of the system. To visualize flood data, a grid layer is developed and added into the map component of the GAV framework. Grid cells are coloured according to their water columns. A colour scheme is designed based on the suggestion of the domain experts from SIM. It ranges from white blue, blue, green, and orange colour to red and dark red colour. The dark red colour indicates a high value of water column and the white blue colour indicates a low value of water column. An animation controller is used to allow the user observe the progress of the flood event over time. The user can also use the time slider to move back and forth in time dimension to explore the flood data of any time period.

To allow the user to explore and analyse the flood data and the damage to buildings, a number of interactive visualizations are added into the system and linked to each other to enhance the performance of analysis. They include 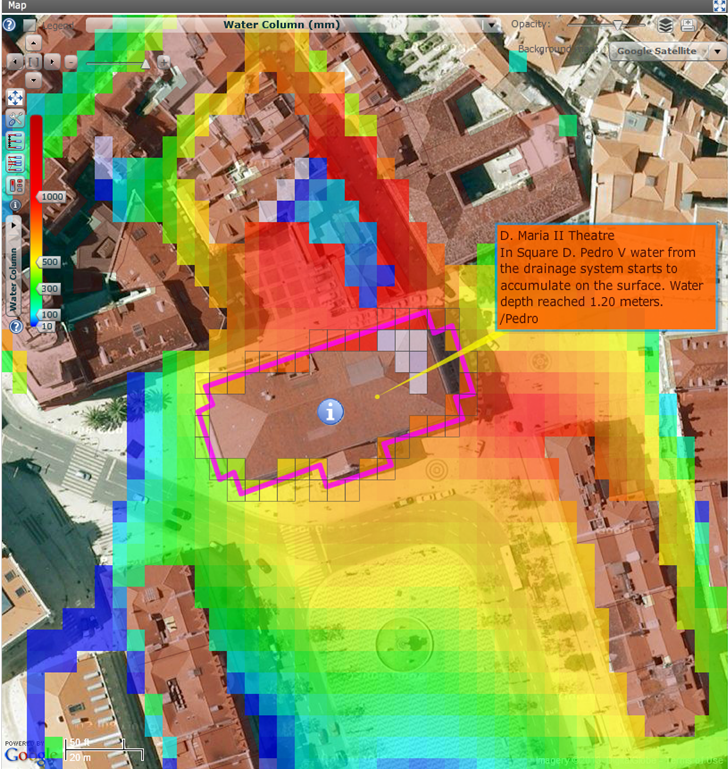 The system has been used to analyse the flood data which simulates the real flood event taking place on 29 October 2010 in Lisbon. The result of an analysis process shows, for example, that the area around the National Theatre D. Maria II is one of most affected areas by the flood event (see figure above). After 2 hours 10 minutes the floodwater in this area reaches the maximum value of 1.2 meters height, and the theatre is surrounded by floodwater in every direction.

A paper "Geovisual Analytics and Storytelling Applied to a Flood Scenario" by Quan Ho and Mikael Jern was presented at GeoViz 2013 international conference in Hamburg: Interactive Maps that Help People Think.