together with Prof Helmuth Hertz 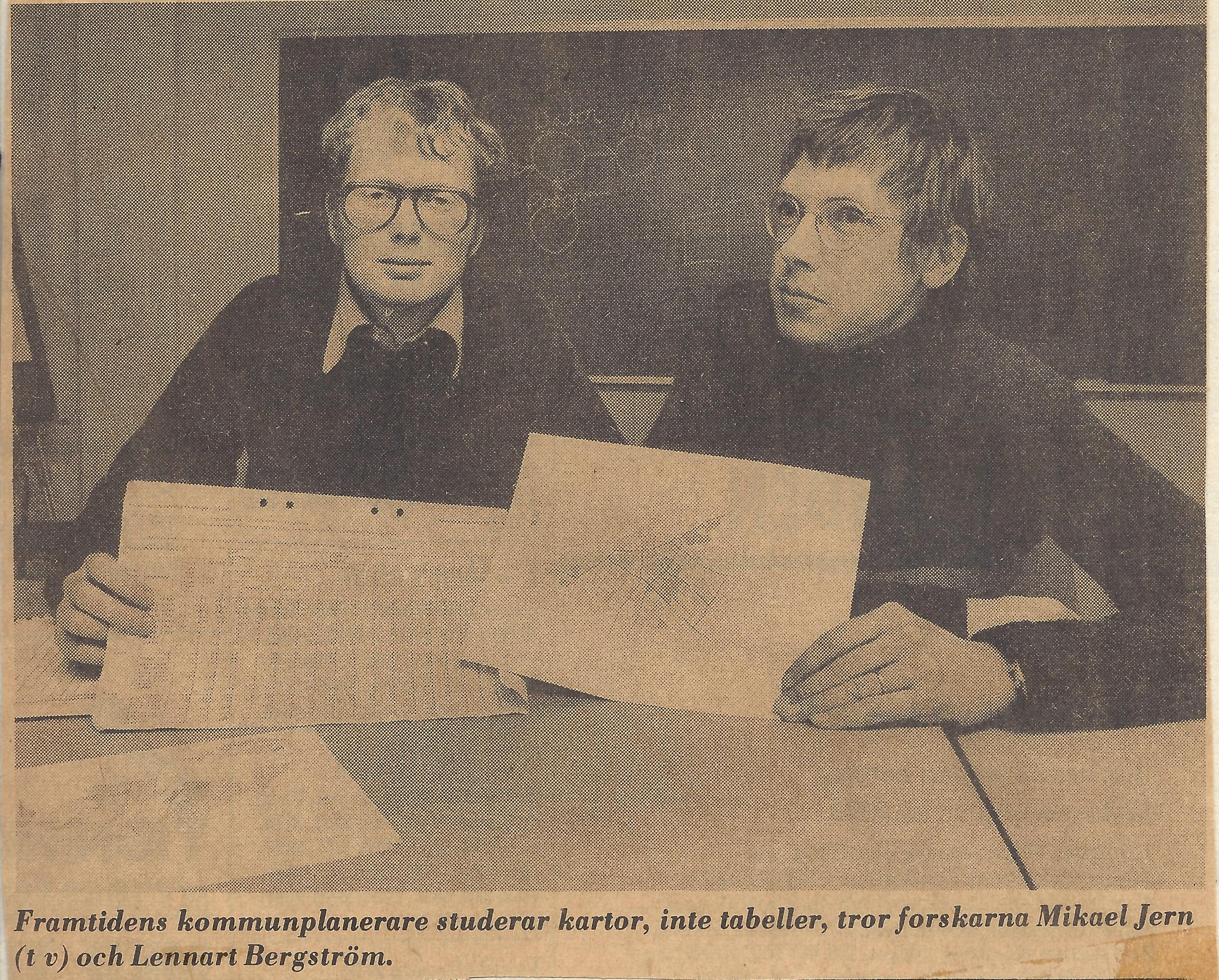 In 1970, prof Mikael Jern developed novel computer graphics software in the area of raster based technology using traditional line printers, overlapping characters to simulate grey scale displays. The picture (from a Swedish magazine 1970) shows the two researchers Dr Lennart Bergström and prof Jern (left) at Technical University of Lund with samples of the world's first raster visualization produced with a line printer on a UNIVAC 1100 computer at the Lund University Computing centre. 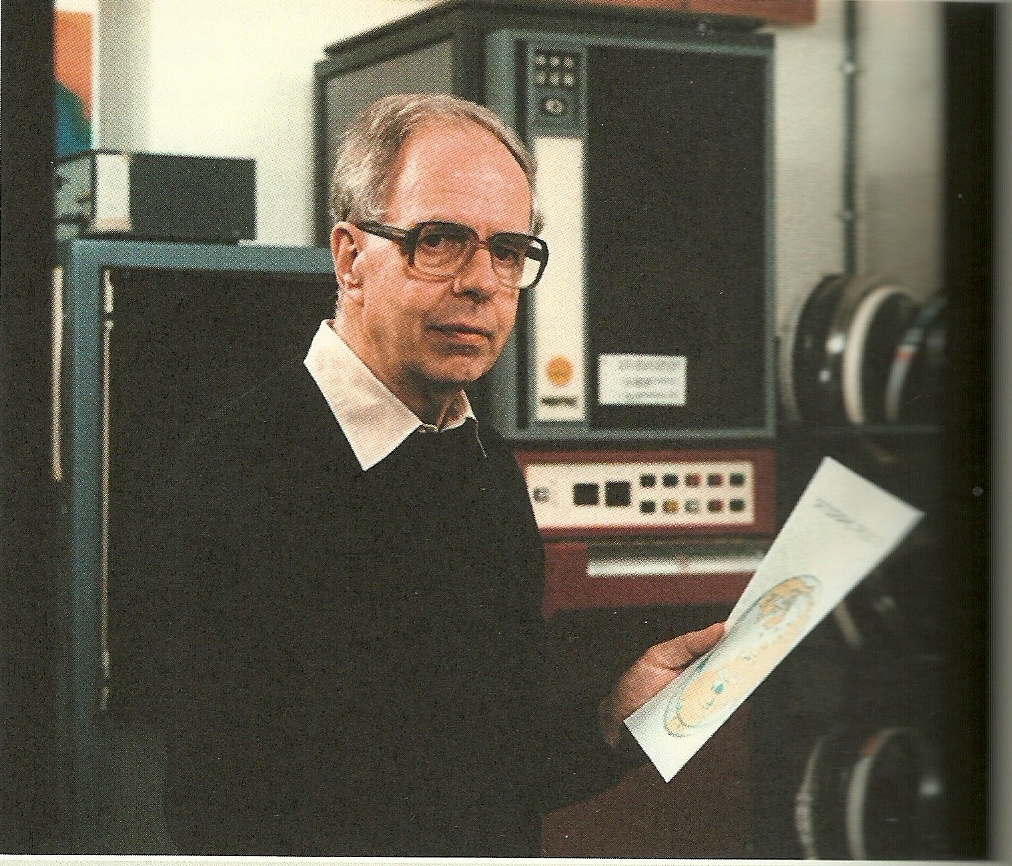 1971-1976, Jern worked together with Prof Hertz (see picture) at the Technical University of Lund. Together they invented the Color Graphics System based on the world's first Ink Jet Plotter for raster based visualization software. 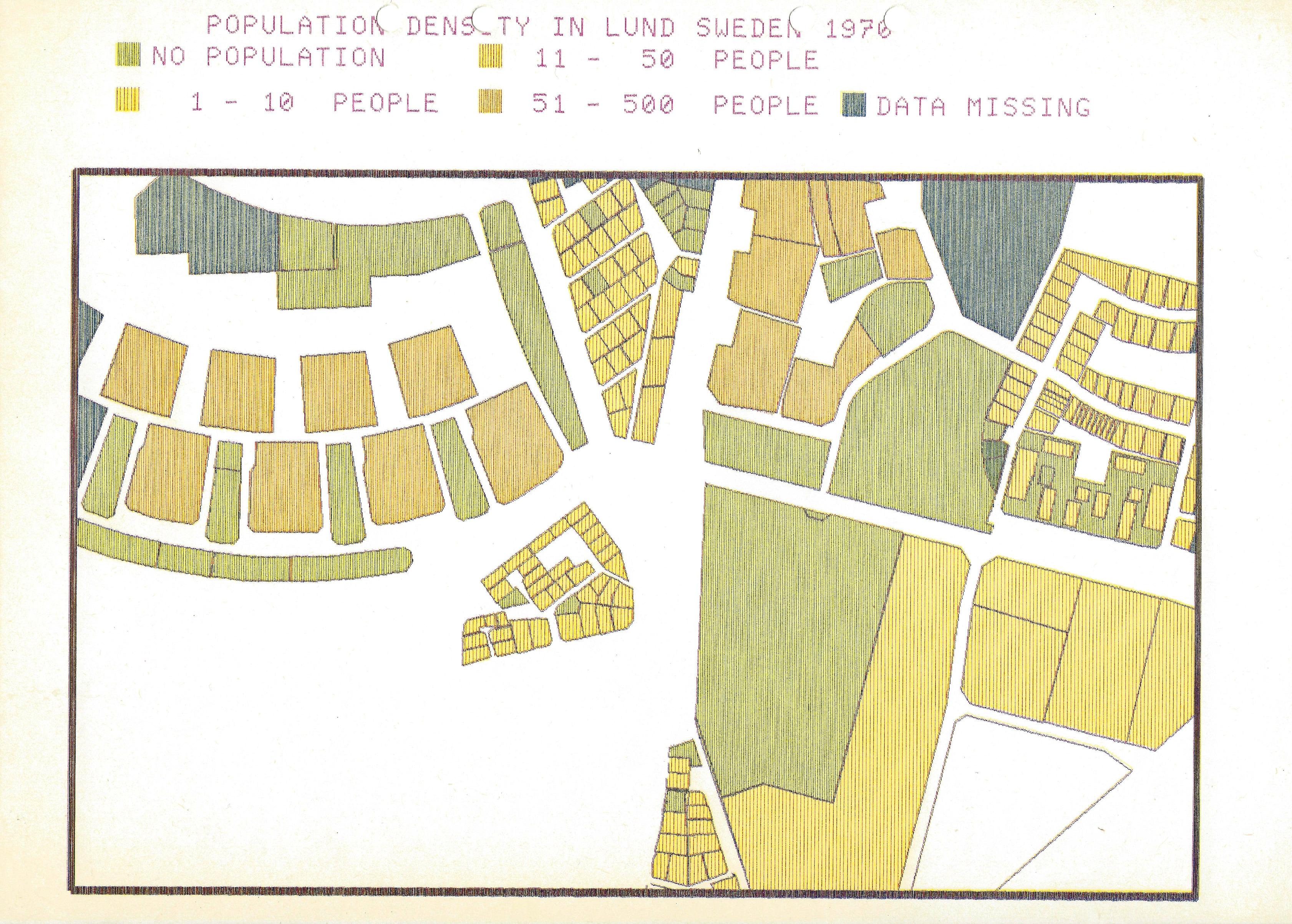 This is the world's first computer generated colour picture in high resolution. First produced by prof Jern's COLOR software and then plotted in a high resolution with the ink jet plotter.

The picture was produced from statistical data originated from the region Klostergården in Lund city showing the number of people living in houses in the area. The picture was plotted in 1,5 minutes using million of ink droplets in magenta, yellow and blue.

In 1976, prof Jern and prof Hertz sold the right to manufacture and distribute the Color Graphics Plotting Systems to the U.S.-based (Boston) CAD company Applicon. More than 300 large systems were installed worldwide and used extensively by, for example, major oil companies for producing color seismic display. 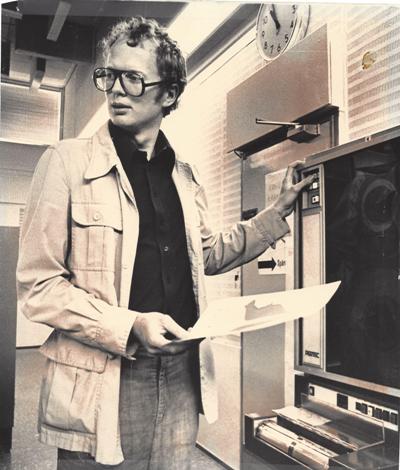 The generation of a colour picture is done in two steps. First a picture entirely consisting of numbers is designed. The computer works with logical ones and zeros instead of physical droplets, where the ones correspond to droplets on the paper. The raster coded picture is stored on a magnetic tape, which in the second step is read by the Color Plotter, The raster information on the tape is then transformed into a colour picture. 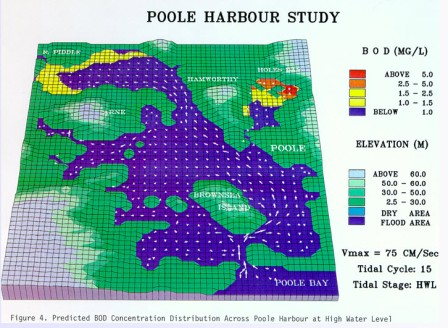 Mikael with the ink jet plotter 1974

In 1976, prof Jern together with Dr Kjelldahl KTH founded SIGRAD (Swedish society for computer graphics) and he remained as its chair for 25 years promoting computer graphics in the Nordic region through workshops and conferences.

In 1981 he founded UNIRAS Aps to address the industry with a more general-purpose raster graphics software approach. UNIRAS A/S, UNIRAS Ltd and UNIRAS Inc became world-leading suppliers of Visual Data Analysis and Presentation graphics software for scientists and engineers with a revenue exceeding $25 million in 1987. UNIRAS was also a supplier of raster software to IBM, Tectronix and Versatec. When Advanced Visual Systems (AVS) acquired UNIRAS in 1993, he was appointed to the position of AVS Fellow to recognize his contributions to the evolution of AVS. Prof Jern is committed to graphics standards and was the project leader in a joint UNIRAS-IBM project to develop the standard graphics software system (GKS) for IBM in Hursley UK. He has been a member in various graphics metafile committees supporting CGM, GKS etc. He has coordinated several large EC funded projects INDEX, NOVICE, CONTENTS, SmartDoc and MUSIC in the domain of knowledge-based information visualization and result in large academic and industry network. These projects developed innovative Web based visualization technology based on both VRML and downloadable Web components. CONTENTS and SmartDoc are early novel EC research projects to create dynamic visualization documents (see publications below). 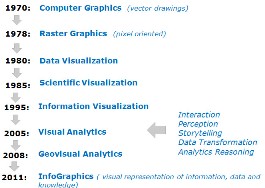 Information Visualization (InfoVis) had become the hottest topic within the visualization research community in this late 90's. (see historical graphics table).  The focus of this new discipline was on effective and user-validated ways of presenting and interacting with data and creates an internal representation of the information in the mind of the user.  “Data” in this context was abstract, spatial, continuous, textual, multi-dimensional and often non‑spatial in the sense that there is no a priori mapping of the data into three‑dimensions. Mapping non-spatial data through to timely, quality decisions was a major challenge. InfoVis had an essential role to play, providing new powerful tools such as parallel coordinates and table lens to help us to better understand multivariate data. 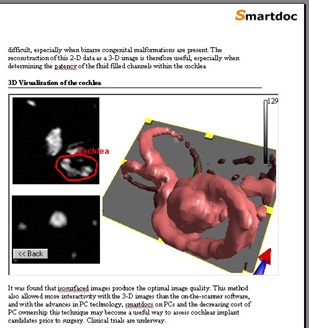 SmartDoc (CONTENTS for medical visualization) is the first implementation of Storytelling and integrates interactive and collaborative visualization into reports in MS Word format. The normal contents of a report, text and images, are extended with interactive 2D/3D visualization, image, analysis and decision support. Data and bookmarks are integrated into the document structure, which make the SmartDoc just as easy to handle as a traditional document. The reader is given a more active role and can interact with the embedded data in order to gain a better understanding of the report’s contents. The author prepares visualization bookmarks, i.e. stores certain visualization parameters that can be used at any time in order to highlight a specific view that is being described in the text. SmartDoc hyperlinks are special document components that enable access to bookmarks within the embedded application component. Using hyperlinks, a SmartDoc can contain “guided 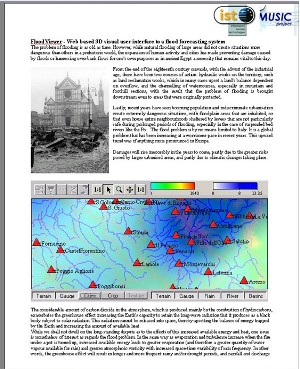 reading paths.” The author uses hyperlinks to define a certain reading order and can prepare a report intended for different groups of readers.

Statistical Visualization and Visual Analytics 2002-2008 based on GAV .NET Framework

In 2004, we introduced our first statistical customized visualization compo­nent, GeoWizard, for interactive exploration of social sci­ence statistical data accessed via the Internet from SCB’s database. The multi-dimensional nature of statistical data calls for cre­ative integrated InfoVis and GeoVis methods (the first era of geovisual analytics).  Ensuring that dynamically resizeable multiple views does not become a mess is far from a trivial programming task. We demonstrated that a dynamically linked view model can efficiently, quickly and easily be developed using Mi­crosoft’s Visual Studio .NET tools. The familiar Windows GUI of .NET based applications most likely represent an appropriate interaction method for the novice end user.

We also introduced and promoted our first use of a lay­ered component-based approach to the development and engineering of applications (GAV). Customizable and scalable high-level application and functional components were designed and developed from low-level atomic compo­nents. We used the .NET Framework and OpenViz Particles, a low-level visualization component framework. We believe that using a layered component approach can potentially provide better scalability and more customizable exploratory infovis and geovis components. Interoperabil­ity with SCB’s databases is achieved through a request for statistical data in a SCB dynamic HTML form connected to the SCB server. Selected data is returned as an Excel file that is imported into GeoWizard.

A key objective was seeking to improve the communica­tion and the dissemination of results to the authorities de­pending on statistical data. We have shown the possibility of deploying interactive infovis and geovis. The main bar­rier in using such innovative technology can be determined as an acceptance problem. Because it is not easy to con­vince people to change their way of thinking and working strategies, new technologies often fail to be introduced to a wide number of users (which should not be misunderstood as acceptance problems in introducing tools). For real profit in using the interactive parallel coordinates view, one has to understand the discovery process as an integral part of the analysis work.

Applied research will be carried out by NCVA in the context of a number of applications, drawn from diverse areas associated with the activities of our partners, showing the generality of the underlying framework. Each of these applications can also be seen as a demonstrator of the technology. In this work, we will follow a ‘science-to-solutions’ approach to address the entire research, development and deployment process. The strong engagement by industry and public service partners that depend on state-of-the-art Geovisual Analytics tools will guarantee that users will be involved from the start and will participate in the definition of the applied research agenda. The partners will, in turn, gain access to front line research, prototypes and components for integrating new and innovative Geovisual Analytics tools.

Below are six examples of our applied research in Geovisual Analytics developed and verified in close collaboration with our partners SCB, Ericsson Research, SMHI and Göteborg Stad: 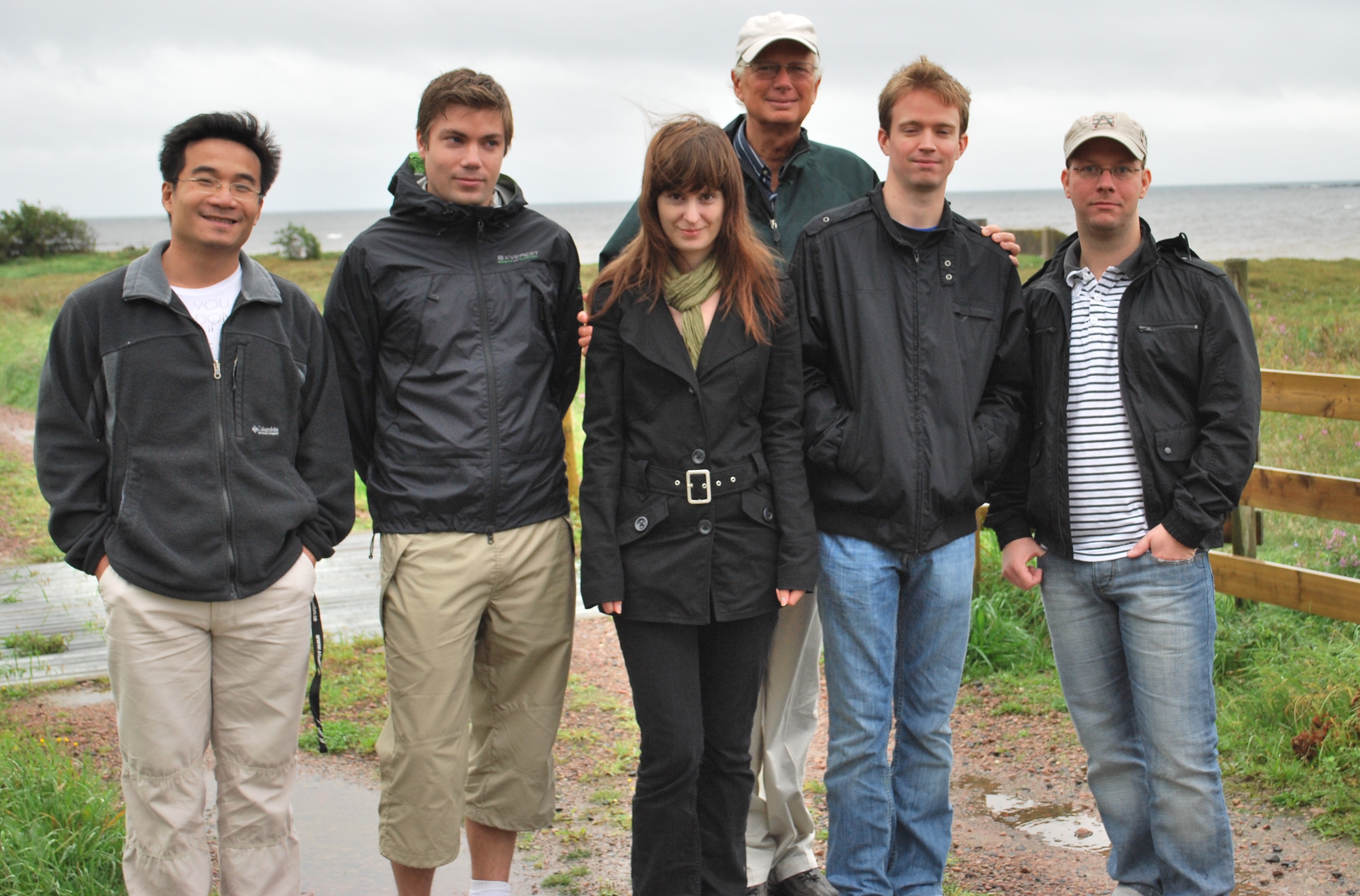 From left Dr. Ho Van Quan, Civ. Ing. Tobias Åström,    Dr. Sara Johansson, Dr. Patrik Lundblad, Dr. Jimmy Johansson and in the back Prof. Mikael Jern who is the director for NCVA. This meeting took place Prof Jern's summer house in the south of Sweden close to Båstad on the west coast. 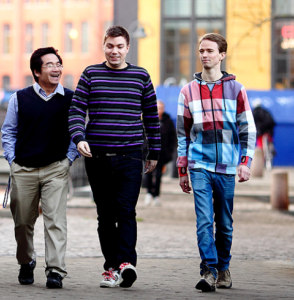 In May 2010, a spin-off company NComVA AB was created by Prof. Jern together with his PH.D students Tobias Åström, Patrik Lundblad and Ho Van Quan.

NComVA was acquired by the business intelligence company QlikTech in May 2013. http://businessintelligence.com/bi-news/qliktech-bolsters-advanced-visualization-with-acquisition-of-ncomva/

In 2007, the Swedish Museum of Science created and published his life story (Tekniska Museet) based on a collection of interviews available at http://www.tekniskamuseet.se/download/18.6aa228912529fe96108000123/12_Mikael+_Jern.pdf